~
That list I posted a couple of days ago is rapidly getting smaller with the news that both Roman Josi and Mark Barberio have come to terms with their NHL teams on entry level deals. Plus, there's a new update on the status of Jacob Markstrom and the Florida Panthers.

Barberio's signing was announced by new Tampa Bay GM Steve Yzerman today, you can find that story here. A 6th round pick in 2008, Barberio had a huge year with Moncton on the way to the Memorial Cup. 17 goals and 60 points in 65 games with the Wildcats was enough to establish career highs in every offensive category through his 4-year QMJHL career. 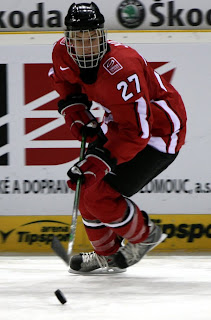 Josi (left) was signed by the Nashville Predators who selected him 38th overall in 2008. Josi has been on Switzerland's entry to the World Junior Championship for the last 3 years and would have joined young countryman Luca Sbisa at the 2010 Olympics if not for an injury. You can read the release from the Predators here.

So as the list of 2008 draftees needing contracts gets smaller there is also a new report that suggest Florida doesn't have to sign Jacob Markstrom this year afterall. According to Steve Gorten of the Sun Sentinel, he's been told by the NHL that the Panthers have until June of 2011. However, if they want him to play in North America next season then the June 1st line in the sand for this year still holds true. Read Here for the explanation.
Posted by Guy Flaming @ 2:51 PM

You missed me posting that Markstrom announcement and the link to the Litter Box story. (See Above on the main page).

Thanks though all the same.