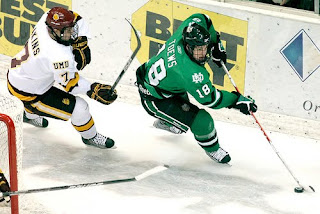 It was reported earlier today by Pipeline Show contributor Brad Elliott Schlossman that David Toews will leave North Dakota and head North to the CHL next season. The Pipeline Show has confirmed that the Brandon Wheat Kings still hold his CHL playing rights and that the team has also heard the same rumor. (Photo: Clint Austin / Duluth News Tribune)

Toews, the younger brother of Chicago Blackhawks star and UND alum Jonathan Toews, has completed two seasons with the Fighting Sioux (can we still call them that?) but has not had the same level of success his brother enjoyed. No one really expected that he would be able to fill his brother's skates at North Dakota - Jonathan had 39 points in his freshman season and David has just 26 after two years in the program. 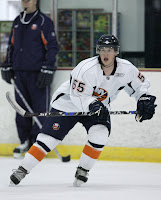 David Toews was a 3rd round pick in 2008 by the New York Islanders, online publication Hockey's Future doesn't consider him one of that club's Top 20 prospects. (Photo: Getty Images)

In his story Schlossman speculated that Toews would either report to Brandon or the QMJHL but Dean confirmed with the Wheat Kings that they do in fact still hold his rights. That said, his option are limited should Toews decide to leave North Dakota to play in his homeland. The Winnipeg native was chosen in the 6th round of the 2005 WHL Bantam draft.
Posted by Guy Flaming @ 7:46 PM