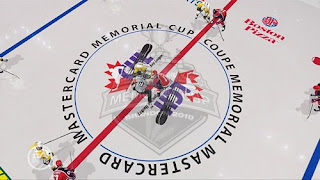 Paul Kelly's comments are nothing new to listeners of TPS. His critical comments about the CHL can be found here. CHL commish David Branch responded on our show here. Recently Kelly, who works for College Hockey Inc fired off another round at the Canadian Hockey League and specifically the WHL, telling young kids to 'be smart' and not sign contracts with CHL teams. You can find that here.

This afternoon at the Mastercard Memorial Cup in Brandon, Manitoba, the CHL held a news conference featuring WHL commissioner Ron Robison and Gilles Courteau who holds the same post in the QMJHL. I asked Robison about the latest comments from Paul Kelly.

"I don't believe any governing hockey association or authority should restrict the movement of a player and his desire to play in the best development league in the world, whether you're American Canadian or otherwise" said Robison.

The WHL commish feels the CHL scholarship program is second to none and pointed out that last year 1000 scholarships were given out worth over 4.4 million dollars.

"Our position is simply to promote our programs and not attack others, and I think we're disappointed in Mr. Kelly's approach to the Canadian Hockey League. More concerned quite frankly about the information that's being provided to families that quite frankly isn't accurate whatsoever." 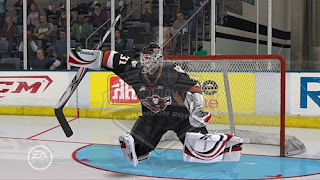 As for some positive news, the Canadian Hockey League will be implemented into EA Sports NHL 2011. How cool is that? I'd imagine most people, Paul Kelly excluded, are pumped about it. Fans can now play for or against all 60 CHL teams, playing the Memorial Cup as a team or create yourself to play in the tournament and try to get drafted. Sounds like fun. (screen shot of Martin Jones above)

I asked Ron Robison about possible expansion to the Island in B.C as well as the possibility of an outdoor game. Last year we told you that WHL was trying to plan a game at Taylor Field right before the World Junior Championship.

On expansion Robison had this to say:

"We never envisioned getting beyond 20 teams quite frankly, let alone 22. There's great demand for our product. We're really monitoring the quality in our league. As far as future expansion we're not ruling it out at this time but we don't see it in the foreseeable future."

As for the outdoor game:

"We've had actually 4 or 5 markets in contact with us. We are continuing to pursue it and hope to have an announcement, we're even looking at it as early as next season, but we're not in a position right now to make any announcement."
Posted by Dean Millard @ 3:45 PM