I made the drive from Brandon to Edmonton yesterday, and without a lot to look at I had plenty of time to try and narrow down the 5 things I would take from this year's Mastercard Memorial Cup. The organizers did a bang up job, the rink in Brandon looked very sharp, and while it wasn't the most competitive tournament in recent years, the best team won, which sometimes doesn't happen in a one game showdown. Here now is my Top 5 Tuesday, Memorial Cup style.

5. Hitmen Heartbreak...again/QMJHL drought continues
The Calgary Hitmen were one goal away from reaching the Memorial Cup final for the second time in team history, and once again overtime cost them. In 1999 Calgary lost to Ottawa in the final. This time around it was again the host team that knocked them out in next goal wins time as the Hitmen after dominating Brandon in the round robin couldn't hold off the pesky Wheat Kings in the semi-final, losing on Jay Fehr's overtime winner. Meanwhile the Moncton Wildcats kept the Q league drought going. Not since Quebec won it all in 2006 has a QMJHL team won, and you have to go back to 2000 when Rimouski lifted the trophy to find another Q league winner. Moncton was the only team that didn't win a game this year, although they were pretty close in each contest.

4. CHL Award Winners
It kind of was lost in the shuffle, but the CHL handed out it's hardware Saturday afternoon in Brandon. Here's a rundown of who went home with what:

Jack Link’s Top Prospect of the Year: Tyler Seguin, Plymouth Whalers
On the eve of Taylor Hall winning a second straight Memorial Cup and MVP award (more on him below) Tyler Seguin still managed to keep his name on the scouts minds by being named the league's top prospect. Also considered for the award was Brett Connolly of the Prince George Cougars, and Brandon Gormley of the Moncton Wildcats.

Chrysler Dodge Top Scorer of the Year: Brandon Kozun, Calgary Hitmen
While Kozun's injured ankle/foot didn't allow him to lead the Hitmen in Brandon, he did get them there with 107 points, including 75 assists in just 65 games. Kozun beat out the tandem of OHL scoring leaders Taylor Hall of the Windsor Spitfires and Tyler Seguin of the Plymouth Whalers, with Sean Couturier of the Drummondville Voltigeurs leading the QMJHL in scoring. Courturier will be a top 3 pick next year most likely.

Gerard Gallant took the Sea Dogs to new heights this year, winning the franchises first ever regular season title. Saint John posted 53 wins and 109 points. Also up for the hardware was was Mark Holick of the Kootenay Ice (now with Syracuse), and Dale Hunter of the London Knights.

Matt Puempel was the 6th overall pick in last spring's OHL Priority Draft, but was the top scoring rookie in the OHL with 64 points, putting him inside the top 40 overall. Also considered for the award was Ryan Nugent-Hopkins of the Red Deer Rebels, and Petr Straka of the Rimouski Oceanic.

Allen was up against his World Junior teammate for this award, Martin Jones. Allen put up the best goals against average in the Q, as well as save percentage, while winning 29 of his 45 games played. Along with Martin Jones of the Calgary Hitmen, Chris Carrozzi of the Mississauga St. Michael’s Majors was nominated from the OHL

Savard was impressive for Moncton during the tournament. He put up 77 points during the regular season for the Wildcats and also took home the defensive defenceman award in the QMJHL. The Columbus draft pick was the first D-man in league history to rack up the most helpers in a season. Also considered for the award was Tyson Barrie of the Kelowna Rockets, and Jacob Muzzin of the Sault Ste. Marie Greyhounds.

This one was pretty predictable for most people. 50 goals in 57 games on a non playoff team for me made Eberle the automatic pick. He edged out Tyler Seguin of the Plymouth Whalers, and Mike Hoffman of the Saint John Sea Dogs. 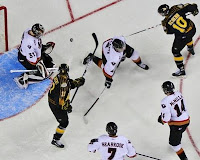 3. Overtime Semi-Final-Rajala Really Good
While Brandon was crushed by Windsor in the final, fans atleast had the excitement of watching their team knock off their rivals from Calgary in overtime in the semi-final. It was the best game of the tournament and for Wheat King fans, it was their Memorial Cup. The Building was jacked up, but unlike some of their other games, didn't resemble a morgue when the final buzzer went. Toni Rajala was Brandon's most consistent player in the tournament and it showed on the scoresheet as the Oilers 4th rounder led Brandon in points with 7. His future is unknown as Rajala told me post game that he has to serve a half year with the Finish military. I would imagine that will happen next year, but because he was drafted out of Europe, he could play in the AHL next year.

2. Windsor's Domination...and not done yet?
The Spitfires weren't pushed by anyone except Moncton, and Windsor didn't seem to care to much early in that game because they had already clinched a spot in the final. Sunday's win was their 12th straight, and 8th consecutive at the Mastercard Memorial Cup. Brandon opened Sunday's game with a 3-0 shot advantage and went hard at the Spitfires. Windsor got through the first few minutes of the attack then went nuts, outshooting Brandon 24-6 after that. They become the first team to repeat since Kamloops in the mid 90's and who knows they might 3 peat. Sure they are losing Taylor Hall and likely Greg Nemisz, but goaltender Jack Campbell as well as Euro Tom Kuehnhackl and maybe Austion Czarnik are all coming in next year. Justin Shugg will be back, and I think Cam Fowler will as well. I don't see Nashville rushing Ryan Ellis so the Spitfires will be good again. Early word is though that Kitchener will be the team to beat next season.

1. Hall of a Tournament - Fowler the Howler
A while back we had Jack Campbell, goaltender for team USA on the show and talked about his double gold year with U20 and U18 victories. Cam Fowler one upped his American teammate with a WJC title and a Memorial Cup championship. Scouts like winner's and Fowler's resume is full of it now. 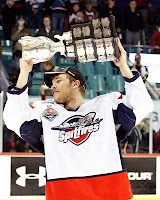 As for Taylor Hall, he was simply outstanding in this event, right from the start when he was hammered into the end boards by Travis Hamonic of Brandon, but returned to score a hilite reel goal a few shifts later. Every team took runs at Hall and he bounced back each time. Sunday he scored a short side shelf goal that not many NHLer's could replicate. However I was most impressed by his back checking and shot blocking, showing scouts he's not just a one dimensional player and earning him a second straight tournament MVP award I'm still not convinced he can play centre at the next level, but with the way Taylor Hall is going, nothing about him will shock me anymore.

There were some other impressive and not so impressive outings by some players in the tournament. Players who need to be signed by June 1st or they go back in the draft. Guy will have more on that long list in the near future here at COMING DOWN THE PIPE.
Posted by Dean Millard @ 3:17 PM