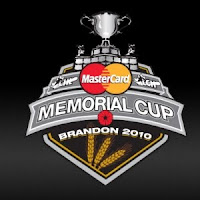 A horrible gaff at a most inopportune time cost the Moncton Wildcats dearly and gave the Calgary Hitmen a huge win at the Memorial Cup on Saturday. The WHL champions overcame 3-0 and 4-2 deficits and scored with just over a minute remaining in regulation time to steal the win and did so without the aid of the CHL's top scorer.

With Brandon Kozun dressed but unable to contribute (ankle), the Hitmen found themselves badly outplayed for the first half of the contest. Moncton outshot the Hitmen to the tune of 13-3 in the first period but only managed a single goal in the frame. 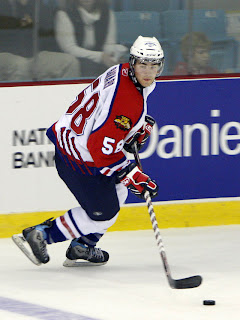 The second began much like the first, with the Wildcats carrying the play and getting the better chances. David Savard's (CLB) point shot eluded Martin Jones (LA) and put Moncton ahead by a pair. Seven minutes later the Wildcats went ahead by a field goal on the strength of a Alex Saulnier marker and Calgary looked to be reeling. (Photo: David Savard courtesy monctonwildcats.com)

However, Calgary started getting aggressive and finally got some shots on Nicola Riopel (PHI) and we rewarded for the effort. Tyler Fiddler, on what looked as though he was going to blow a perfect scoring opportunity by holding onto the puck too long, made a small head fake that seemed to throw off Riopel and the shooter beat the goalie short side from the slot.

At the end of the second period the Wildcats still held a 3-1 lead in goals and were outshooting Calgary 28-14. Although the Hitmen ended the period well, all it would take was a solid 20-minutes of hockey from Moncton and the WHL would have been 0-2 early in the tournament.

Unfortunately for Moncton, Calgary came out to start the third the same way they'd ended the second and Joel Broda's (WSH) lamplighter at 3:08 closed the gap to a single goal.

The Hitmen continued to press but when Matt Mackenzie took an undisciplined penalty and Moncton capitalized, it certainly looked like Calgary was down and out.

Trailing 4-2 and with less than 6 minutes left to play Calgary stepped up their desperation level. Moncton defender Simon Jodoin was flagged for interference and the Hitmen were given a pivotal power play and they made the most of it. Giffen Nyren's point blast found the back of the net and once again the Hitmen trailed by a single goal.

Calgary would tie the game just under two minutes later when Kris Foucault (MIN) completed a centering pass from Jimmy Bubnick (ATL) and the momentum had clearly shifted to the WHL champions. 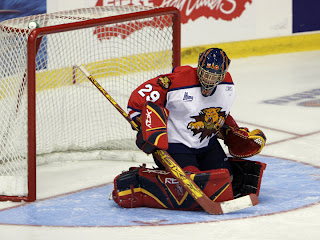 The winning goal came with only 1:18 remaining when Bubnick dumped the puck hard into Moncton's end sending the disc around the net where it took a weird bounce and ended up in front of the net to Riopel's right. The goaltender, unaware that Tyler Shattock (STL) was hard on the forecheck, didn't cover the puck or attempt to play it. Shattock pounced on the opportunity and simple surpised Riopel by slapping the puck through his legs and into the net for the go ahead goal. On the replay Riopel can be seen motioning to his teammates as if to say "thanks for the heads up guys... I had no idea he was there!" and the lack of communication cost them.

Moncton was stunned. Two minutes earlier they had to have been thinking they had the game in the bank and now coach Danny Flynn was calling a timeout to rally his troops. Pulling Riopel didn't help and the game ended 5-4 for Calgary.

A massively disappointing final ten minutes for Moncton and the Hitmen have to be feeling like they really dodged a bullet because they were far from their best in the game.

Leading scorer Brandon Kozun dressed but was unable to play, his availability for Calgary's next game on Monday night against Windsor is up in the air. The fact that they beat the QMJHL champs without their best player and without playing their best game might be encouraging for Calgary - but they can't afford to have a similar effort again in the tournament.

Moncton won't have long to wait to get back as they take on the Brandon Wheat Kings on Sunday afternoon.

The final shots were Moncton 38-27 but the victory went to the Hitmen. Postgame reaction from Moncton coach Danny Flynn and coach Mike Williamson:

Great wrap-up Guy, I posted a few more thoughts over at my blog. In particular, some historically weird things have happened so far:
http://keepyourstickontheice.wordpress.com/2010/05/15/surprising-disappointing-memorial-cup-opener-for-cats/