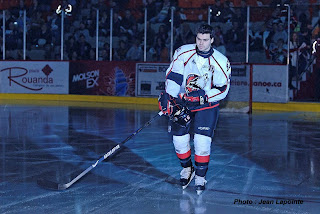 The Edmonton Oilers have announced that they have inked 2008 5th round selection Philippe Cornet to a 3-year entry level deal. Details can be found here.

After 3 years with the Rimouski Oceanic, Cornet ended his QMJHL career with the Huskies of Rouyn-Noranda where he matched his scoring total of 77 points from the previous season.

Cornet ended his junior days with a total of 224 points, just shy of a point-per-game as he appeared in 235 QMJHL contests.

The Quebec native represented the QMJHL during last year's Subway Series against the Russian Selects and also earned a tryout for Team Canada's entry for the 2010 World Junior Championship in Saskatoon but was a late cut.
Posted by Guy Flaming @ 3:15 PM