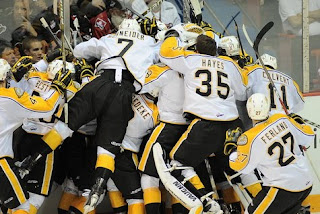 I didn't get to hear one of my favorite play by play men's call Friday night when Brandon beat Calgary in the Mastercard Memorial Cup semi-final, in overtime. He could have borrowed fellow sportsnet colleague Kevin Quinn's line if he wanted to, but I'm sure as clever as Peter is, he came up with something great.

As did the Wheat Kings.

Brandon easily played it's best game of the tournament. They were physical and relentless on the forecheck, forcing Calgary into uncharacteristic turnover-ville. Brandon got the puck deep and got behind Calgary's defenceman, winning battles for the puck. Something they didn't do earlier in the week.

Things certainly didn't look good after 20, the Hitmen despite a ferocious Brandon attack led 2-0. However Brandon ate their spinach in the intermission and Alexander Urbom got them on the board early in the second and gave Brandon all the momentum. That is until Tyler Fiddler scored a soft goal on Jacob De Serres, beating the inconsistent goaltender short handed from a ways out. The kind of goal that can kill a team's will. For some reason it didn't with Brandon and Matt Calvert brought them within one, and with 10 seconds to go in the middle stanza, Travis Hamonic wired home a power play marker to even things at 3 after 2. Brandon outshot Calgary 21-5 in the second..

The Third was a nervous one for the home crowd until Colby Robak, again on the power play, gave Brandon their second lead. It stayed that way until a bounce off the back boards found Misha Fisenko's stick and he tapped in the equalizer. The play was reviewed but it counted and with just over 5 minutes to go, things were tied. 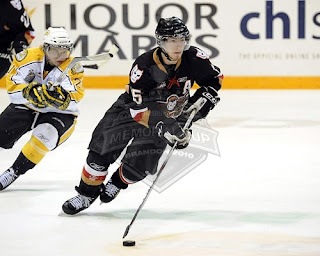 Nothing was settled in the final minutes to both teams headed to their dressing room's and got ready for next goal wins time. The intermission of overtime can be a lonely, nervous place, even if you're surrounded by teammates in a small dressing room. Brandon was facing the fact that they hadn't beat Calgary since game one of the WHL eastern conference final, throw in Calgary's pounding on Wednesday and it was 5 straight losses to the Hitmen. And if that wasn't enough, Calgary was trying to end Brandon's season for the 4th time in 5 years. Was fate conspiring against the hosts?

3:16 seconds into sudden death, Jay Fehr potted the winner on a scramble in front and the roof nearly blew off the entire Keystone Centre complex. The Wheat Kings had slayed the giant, and now on their home ice, in front of their fans, will play for a Memorial Cup championship on Sunday. It will mark the first time the Wheat Kings have played for the title since losing in overtime to Peterborough in 1979.

Now all they have to do is beat Windsor, the team that drubbed them 9-3 on opening night. I Can't Wait!!!
Posted by Dean Millard @ 9:46 PM