Interesting Day For Current and Maybe a Future Oilers Prospect

*
Wow. That was pretty impressive.

Do you think I'm talking about Jordan Eberle's near record tying outing at the World Hockey Championship or Taylor Hall's huge statement at the Memorial Cup? 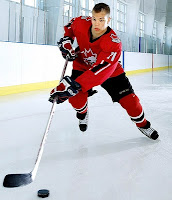 For me Hall's night was the most interesting and impressive. Minutes into the lid lifter in Brandon, Wheat King D-man Travis Hamonic drilled the possible #1 pick into the end boards. The angle I saw on Global Sports with Kevin Karius was amazing and KK was right, he could have broken his neck. After that Windsor roared back scoring at will on the hosts turning the Wheat Kings into Wheat Puffs. Hall was right in the middle scoring a great goal after dangling the puck between his legs. This guy is dynamic and made some major noise tonight as the defending champs put on display just why some consider them the favorites.

I thought Brandon matched up with their forwards and blueline and even thought goaltending was close, but when surprise starter Andrew Hayes was lit up early it was over. Hall coming back after a helacious but clean hit was impressive. Even though Oilers G.M. Steve Tambellini wasn't in the Wheat City, someone from the Oilers was and the brass had to be impressed.

(January 3, 2009 - Photo by Richard Wolowicz/Getty Images North America)
No doubt Tambellini watched the Hall hilite reel on Rogers Sportsnet, just like he was tuned into watch Jordan Eberle tie, then fall one point short of a Canadian World Hockey Championship record for most points in a game. With Canada taking charge in the 2nd, Eberle continued to shine with a Maple Leaf on his chest. He set up 3 goals in the middle stanza....then was awarded another assist. In the 3rd his cycle down low gave him all day to put away his first ever WHC goal. It looked like a 5 point day, but they took away one assist. Still 4 points in his senior debut, even if it was in a rout against Norway, is still impressive. Let's hope it continues against Sweden on Sunday.

Oiler fans will be watching a few prospects in that game. Magnus Pavjaarvi-Svensson has 3 goals, 3 helpers is +6 and is 2nd on the team with 14 shots, all in just 4 games. He leads the team in scoring with just over 14 minutes per game. Oilers G.M. Steve Tambellini is heading to Germany soon, and I would imagine will be talking contract with last year's 10th overall pick as soon as the tournament is over. Newly signed Linus Omark has 2 points in his 4 games during the tournament.

Whether it was june 1st or June 15th the Oilers took care of 2008 sixth round pick Teemu Hartikainen today, signing the Fin to a 3 year entry level deal. He has good size and goes to the front of the net, which is never a bad thing if you like to score goals. Hartikainen put up 33 points in 53 games in his second full season in the Finnish Elite League. I liked him at the World Juniors, he was the most consistent player on an underwhelming line with 2010 prospect Michael Granlund and fellow Oiler prospect Toni Rajala. Hartikainen would be a good addition in Oklahoma City and depending on how he adjusts might be worth bringing up for a game or 2 next year.

Speaking of Rajala he had 2 assists tonight for Brandon. Can't wait to get there Monday morning, but reading Greg Drinnan's post the other day about the drive reminded me how fun it's going to be passing through Saskatchewan in the dead of night.
Posted by Dean Millard @ 2:36 AM

Dean, what kind of potential do you see in Hartikainen?