Sea Dogs need to turn it around 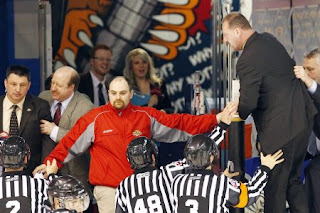 So much for the QMJHL President's Cup final being a hard-fought, tight-checking series guaranteed to go seven games. The Moncton Wildcats have owned the Saint John Sea Dogs in the first two games, punctuated by a 9-3 win Sunday in Moncton. Saint John coach Gerard Gallant snapped, climbing the glass because he felt Moncton's Danny Flynn was disrespecting his team by putting the backup goalie in in the late stages.

Somehow the Dogs have to remember that they're only down 2-0, and a win tonight at home rights the ship. Here's a great line from the team newsletter, sent out by marketing & communications whiz (and history major) Rick Bowness Jr.:

"Much like the Roman Army overcame a devastating defeat at Cannae to crush Carthage in the Second Punic War and the Boston Red Sox rebounded from a 19-8 home loss to the New York Yankees in Game Three of the 2004 ALCS to eventually take the series in seven, the Saint John Sea Dogs will be looking to turn the tide in the 2010 President's Cup Finals on Tuesday night when they host their archrival Wildcats in the best-of-seven championship showdown's third game."

We'll see if the Sea Dogs can make a series of it. They'll certainly need more out of 20-year-olds Mike Hoffman, Nicholas Petersen (0 points) and Marco Cousineau (.840 save percentage, pulled in Game 2). Top NHL draft prospect Stanislav Galiev is also among the players held off the scoresheet. If Saint John loses this series, I wonder if the strange 1-1-1-1-1-1-1 schedule format will be looked at as a factor. After losing the opener at home, the Sea Dogs had earned the right to bounce back with a second home game as the league's top team. Moncton scheduling problems (which seem to occur every year by the way) forced them to play Game 2 on the road, where they fell into an 0-2 hole.
Posted by Unknown @ 7:54 AM