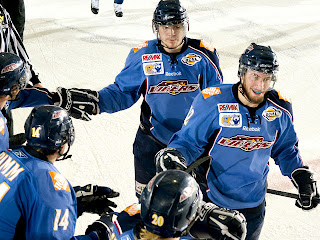 The Vernon Vipers have captured their second consecutive RBC Cup title after defeating the host Dauphin Kings in a 8-1 drubbing today in Manitoba. It is the 6th national title for the club since it first won the national Jr. A championship in 1990. The team is now a perfect 6-0 when in the final game.

Vernon went 3-1 through the round robin portion of the tournament, the loss coming at the hands of the Kings in the opening game back on May 1st. The Vipers rattled off 5 straight victories including 4-2 over La Ronge, 5-3 against Oakville, 4-2 over Brockville. Vernon shutout Brockville 2-0 in the semi-finals before trouncing Dauphin in their own rink.

Kellen Jones led the tournament in scoring with 9 points in 6 games, his twin brother Connor had 3 points in two appearances - hist tournament cut short due to injury.

Dauphin's Ryan Dreger matched Jones' point total but only 1 of his 9 points was a lamplighter.

Not surprising, netminder Graeme Gordon ended the event with the best goals against average at 2.40. His save percentage was just .908 though, well off the .940 mark set by Brockville's Justin Gilbert.

The Vipers got to the tournament thanks to a hard fought 7-game series win over the Spruce Grove Saints in the Doyle Cup after claiming the BCHL title in April.

A couple of days ago the RBC Cup Award winners were announced, only the round robin portion was taken into consideration obviously and makes me wonder why they don't do it after the event is over. Only one Vernon player took home hardware and it wasn't in a category you might expect from the Championship winning team. 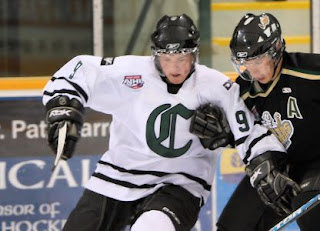 It was also announced that Sherwood Park Crusaders forward Cody Kunyk won the 2010 RBC Canadian Junior Hockey League Player of the Year award. The AJHL’s most valuable player, Kunyk finished in the top five in league scoring with 44 goals and 87 points. Kunyk also claimed team accoldaes capturing Sherwood Park’s awards for most valuable player, top scorer and fan favourite. He represented Canada West in November in Summerside, P.E.I., leading the 2009 World Junior A Challenge in scoring and earning a spot on the tournament all-star team while helping his team to a silver medal.
Posted by Guy Flaming @ 3:29 PM