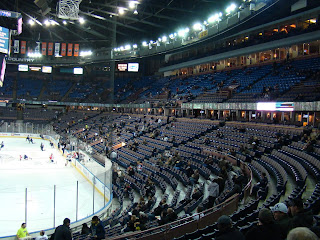 It's still early but a look at attendance figures across the WHL shows that some teams are having a strong start to the year at the gate while others are showing an alarming drop in ticket sales. This isn't limited to just the WHL of course as teams in every North American league have their ups and downs but for now let's just look at the Major junior loop in Western Canada. 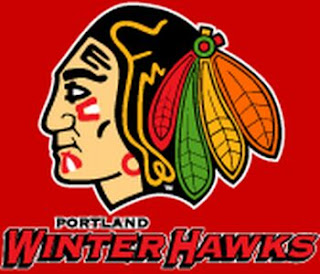 According to this chart, as of October 21st there are just 8 of 22 WHL teams showing an increase of ticket sales. Not surprisingly, the Portland Winterhawks are enjoying a nice rise in attendance considering the quality of the team on the ice compared to the last decade.

However, attendance doesn't seem to be affected all that much, at least early on, by on ice performance. The Calgary Hitmen are up by more than 10% this year despite having a much less successful record compared to recent years. Seattle is way up (almost 48%) but the T-Birds are pretty mediocre so far.

The only team that is showing zero growth or loss is Medicine Hat and that's simply because with nightly sellouts year after year, there is no up or down.

That leaves 13 clubs who have seen a drop in attendance, just a slight one in the cases of Kelowna, Brandon and Spokane but much more dramatic in other markets.

I am stunned to see that the resurgent Prince George Cougars, 4th in the Western Conference but tops in the B.C. Division going by winning percentage, have had a decline of almost 10%. This is a club that now has star power and is more than competitive for the first time since 2005-06 but that clearly hasn't registered with the ticket buying fan base yet. The Cougars are averaging 3009 people so far, better than four other clubs but not nearly as good as they deserve.

I am assuming it is the loss of star power that has hurt Regina the most, but being last place probably plays a role too. The Pats are down 10.28% so far this year without Jordan Eberle, Colten Teubert and other fan favorites. The team is clearly in a rebuild and once new GM Chad Lang moves out guys like Carter Ashton, I wonder if attendance drops even more.

Despite being in 1st place in the Eastern Conference, the Saskatoon Blades are down a whopping 14.85% at the gate. Less than 4000 people are showing up to see, arguably, the best team in the Conference. I can't explain it so if anyone has an idea, please educate me. It's not like there is a lot of competition in 'Toon-town for the Blades.

No question the most dramatic drop off in the WHL is the massive 24.55% decline in ticket sales for the Edmonton Oil Kings. Now in their 4th season, the initial 3-year Founders Club packages have expired and clearly many of those customers didn't renew their seats. The announced attendance average at Rexall this year has been 3570 which is not a clear indication of actual people in the seats. Having been to all but one home game for the Oil Kings this season I can tell you that, aside from opening night, there have only been about 1500 people there. Last Friday's game against Medicine Hat may have brought in 2500-3000. The photo at the top was taken during warm up of a pre-season Oilers game but it's a pretty good representation of what it looks like during Oil Kings games on some nights (but push the people from the second deck down because they don't sell tickets outside of the lower bowl anymore).

If anyone has ideas on why attendance is suffering in so many WHL markets, I'd love to hear it. Over the next week or so I'm going to be looking into some things to try and shed some light on the subject.
Posted by Guy Flaming @ 1:19 PM

I think for the Oil Kings, Oilers should help them out a little with the marketing. Especially when teams like Prince George or Medicine Hat are here. Or even a team like Red Deer or Portland. You know saying like watching Oilers draft picks / future picks and stuff like that.

Part of the issue in Saskatoon and Regina is that there were people who bought Blades/Pats season tickets in order to get World Junior tickets. I'd think that a bunch of those people didn't renew.
As for attendance in Calgary, I was at a game that had maybe 4000 people there and they announced over 8000. Hitmen attendance totals have always been a bit inflated but this year it has been even more pronounced than usual.

As an outside observer (but in a CHL market myself), could the Oil Kings lifetime winning percentage of .386 have a bit to do with it as well?

To use an example of Halifax in the QMJHL, they've missed the playoffs two years in a row (in a league where all but two teams see post-season action) and so other than the home opener and tonight's game against local rivals Cape Breton, the attendance has been announced at around 4000 (about 40% of capacity) and likely is much less than that. For a team that used to lead the league in attendance, the drop is substantial, but can be directly tied to the quality of the product on the ice.

Saskatoon is not a sports town and the arena was built too far away from where the people live.

The drop from last year is due to the World Junior season ticket deal. Many didn't renew.

I don't understand the theory behind artificially inflating the attendance numbers. Why not report the actual attendance and maybe people in the community will feel a little guilty that they aren't supporting their local team.

My thinking with the Hitmen numbers is that there are a lot of season tickets sold, but not necessarily everyone going to every game. If you're busy and can't make it, you can always bank the tickets to be exchanged for more for your friends at any time, so it's not a big deal. That being said, yeah, it's not like they don't know how many people bothered to show up. They have scanners, for crying out loud.

Also, the team's kind of bad this year, at least in the early going. Once everyone picks up on that, expect a decrease in paid attendance.

Great show and great blog. In addition to the people who've responded regarding the drop-off in attendance for the Blades in Saskatoon being due to the World Juniors having come and gone, this city is also Roughriders and U of S Huskie football crazy! Saturday's crowd vs. Medicine Hat was under 3,700 and was head-to-head against the Riders at Eskimos' game. Hopefully, attendance will spike once football is done...so long as the Blades are still humming along at relatively the same pace as right now.

Thanks Les... an appearance on our show is well overdue I think. We'll have to set something up in the near future.

-Prince George is one of very few cities and the only 1 west of Ontario that I know of that has both a major junior club (Cougars/WHL)and junior A club (Spruce Kings/BCHL)
- Prince George is a 2 horse town as far as industry goes: forest industry and railroads. The forest industry has been bleeding, companies gone under , merged, massive layoffs, cut back on expenses.
The Govt. sold BC Rail to CN. Again hundreds of people lost their jobs.
most forest companies and both railroads were huge season ticket holders and also had corporate suites.
Alot of these are no longer and many of the forest companies left are based out of the US or Asia...not big on hockey.

Quick note - Prince George is not the only city west of Ontario with both major junior and junior A teams.

Calgary has a WHL team and two Junior A teams, with a 3rd Jr A team about 15 minutes south of Calgary.

Also, the BCHL's Westside Warriors play out of West Kelowna. That is essentially the same place as the WHL's Rockets since their arenas are only 10 km apart.

And a third WHL city, Edmonton, may not have a Jr A team bearing the Edmonton name, but there are teams in St. Albert, Sherwood Park, and Spruce Grove, which are all within a few minutes' drive of the city.

Thanks Alan...major braincramp on my part as I attend AJHL games in most venues but somehow never even thought of the AJHL in this discussion.
thks