*
We kicked off Tuesday night with a bang as WHL Vice-President and the head discipline man Richard Doerksen joined us to discuss how he came about the 12 game suspension for Brenden Shinnimin. Shinnimin as you can see here nailed Saskatoon's Josh Nicholls hard into the boards. He was given a major boarding penalty and Tuesday learned his fate. Why 12 games? Will this deter others? Does the WHL have a reputation as a league that is to soft? All questions we asked Richard. 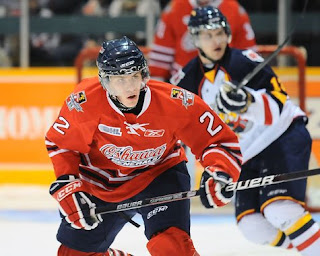 Our 2011 draft prospect was Boone Jenner of the Oshawa Generals. A budding power forward who might be a blend of Greg Nemisz's size, Ryan O'Reilly's leadership and Jeff Carter's skill...when he's going on all cylinders that is. Jenner told us about his first line brawl, the Gens hot start and what watching his brother at the 2007 Memorial Cup did for his drive. (Photo: Aaron Bell CHL/OHL Images) 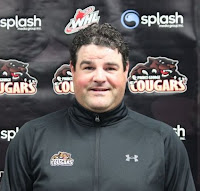 We jumped back to the WHL for a chat with Prince George GM Dallas Thompson. No team has been busier this season as Thompson has moulded his team into a contender early in the season. From Oilers prospect Martin Marincin to rookie Troy Bourke the Cougars are on the prowl. They've also added Taylor Stefishin who was released by Ohio State University recently, and of course there is the 6th overall pick from 2010 in Brett Connolly who's leading the way. One guy to watch over the next couple of years...Josh Smith, a small, tough, fearless dman.

Our CHL insider Sam Cosentino was up next. Sam is the CHL analyst for Rogers Sportsnet and he'll be with us every Tuesday. Sam gave us his opinion on the Shinnimin suspension and his take on how he would hand out punishment. We touched on Kirill Kabanov going home for personal reasons and why we always think the worst about the talented Russian, and wrapped up our conversation with surprises out the gate from the OHL.

From the CHL we went back to school and chatted with Minnesota Duluth forward Justin Fontaine. A good Alberta boy who is hoping a good senior season will lead to an NHL contract. Justin told us about getting up for Minnesota games and what Gopher fans refer to Duluth forwards as. Fontaine played his junior hockey in Bonnyville of the AJHL, which also happens to be his hometown. The Pontiacs right now are ranked 2nd in the county.

We ended the show chatting about the story I wrote earlier in the day about Taylor Stefishen and how he ended up in Prince George. If you haven't read it, check it out and voice your opinion. The NCAA fan is not likely to enjoy it and we've heard from a few people already. You be the judge, are we being unfair to college hockey? Or do the rules need to change?

We're on again Saturday morning for The Pipeline Show-Game Day Edition. 9-11 am on the TEAM 1260 in Edmonton or online www.thepipelineshow.com.
Posted by Dean Millard @ 11:18 PM