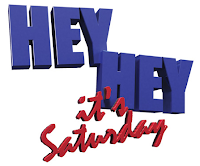 This weekend we talked to a new Oilers prospect who has been off to a slow start in the WHL this year... until last night. We headed south of the border to meet another potential 2011 NHL Draft 1st rounder, we talked about the NCAA action from Friday and we also went East to Kitchener to find out how the Rangers are getting it done this year after some hefty personnel losses. And of course Saturday means another visit from the other media mogul named Millard.


We started the show by going over some of the highlights of last night's action in the CHL and in the NCAA. Obviously, with the Edmonton Oil Kings in action against Medicine Hat, there were four Oilers prospects involved so we spent some time discussing the 7-1 Tigers blowout victory. 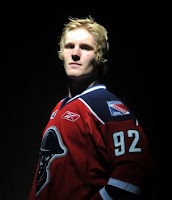 Segment 2 took us to the OHL where Mike Farwell, colour analyst for the Kitchener Rangers, told us how his club has been so successful this year despite the losses of Jeremy Morin, Jeff Skinner and John Moore. Mike gave us a rundown on Swedish import Gabriel Landeskog and Ryan Murphy, two of the key names to remember for the 2011 draft. Also, is there a feeling in Kitchener that a return of Jeff Skinner might be in the works? (Photo: Kitchener Rangers)

Last night the Bemidji State Beavers opened their new arena but it was North Dakota that stole the show. Brad Elliot Schlossman of the Grand Forks Herald recapped the Friday night affair and also touched on some of the other action in the WCHA Conference including Wisconsin's big win, a disappointing loss for both Minnesota and Denver. 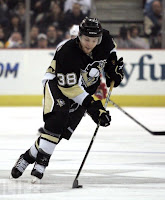 Daren Millard of Rogers Sportsnet gave us his weekly look at the NHL beginning with the impact not having Ilya Kovalchuk is having on the L.A. Kings plus, might there be a similar situation brewing for next summer? When will the bubble burst for the Toronto Maple Leafs? Mark Letestu's fast start in Pittsburgh might not be a flash in the pan, and more.

Our 2011 Prospect of the day was 6'2 210 lbs power forward Tyler Biggs who lives up to his name with the US-NTDP. He's currently suspended for his involvement in a line brawl with Muskegon during USHL play so he walked us through that incident and then told us more about himself, his past and where he expects to be in the near future after the draft in June. 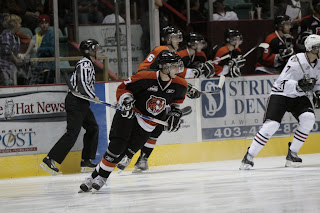 Finally, we heard from Tyler Pitlick, Edmonton's first pick in the second round of the 2010 draft who was in town with Medicine Hat. The rookie had a 3-point night against the Oil Kings which featured one particular play where he deftly set up a goal while taking a hit. The former NCAA player compared his brief WHL experience to that of his time at Minnesota State and talked about fitting into a new league, a new team and a different lifestyle.

"If you missed it live, hit the archive"... every interview from every show, including this one today, can be found in our Media Archive.
Posted by Guy Flaming @ 6:45 PM

Great interview with Biggsy. Had a pleasure to work closely with him for a full year in his midget season (Toronto).

Thanks Jeff, much appreciated. Well spoken guy, like the size and PIM already too.