So the Oilers are down to 25 players after sending and hoping to send 8 players to Oklahoma City. On their way to OKC are the following:

The only player on this list that you can look at and say might be a game changer is Linus Omark with his potentially high end skill, and while he did have 3 points in 3 pre season games, it wasn't a hard decision to send him down. He doesn't have to clear waivers and doesn't have an out clause to go home until next year. Omark will be back and I have no problem with anything he said today.


Reddox didn't speak to the media, although he did say over the weekend that he hoped to make the Oilers but if not maybe attract attention from another club. The Oilers are hoping that doesn't happen and might bring him back if they can sort out their 3 headed goalie monster. 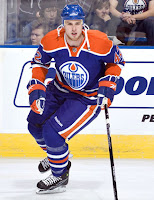 O'Marra had his best training camp as an Oiler, and for a minute I thought about him sticking around, but he will be very valuable in OKC, if he gets there. Would another NHL team kick some tires with him? I think so. Will he actually be claimed? I don't think so and when he joins the Barons he should be reunited with last year linemate Colin McDondald.

As for Giroux, Vande Velde and Ondrus it's not at all surprising. There was some buzz around Giroux early because of his lofty stats in the AHL, but he only scored once and buzz fizzled out. VV looked exactly how he was billed. A strong 2 way player who can win draws. He even scored, but will benefit from the AHL. As we've stated in the past, you can likely pencil him in as a bottom 6 forward next year, if he continues his development. Ondrus was ticketed for the Barons from the get go, but stuck around with his strong play.

On the back end, I actually liked Petiot the most out of the 3 blueliners battling for one spot. Shawn Belle joins Petiot in losing a spot to Theo Peckham. Petiot impressed me with his calm play and added a physical element I didn't know was there. By keeping Peckham they avoid losing a player they've invested some years in to a couple of newcomers.

Not on the list is a goalie. Jeff Deslauriers was excellent against Calgary last night, but most think he'll be the one put on waivers. Will he be claimed? It depends on if teams value him over guys like Erik Ersberg and Thomas Greiss who will also have to clear waivers.
Posted by Dean Millard @ 6:41 PM