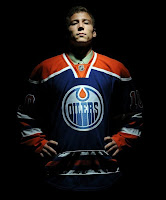 The Edmonton Oil Kings haven't had a lot of success against the Medicine Hat Tigers since the OK Kids rejoined the WHL and that continued with a weekend sweep courtesy of the Tigers and Oilers 2010 2nd round pick (31st) Tyler Pitlick.


Medicine Hat had their way with the home side Oil Kings Friday night in a 7-1 drubbing in which Pitlick set up 3 goals. One was particularly nice in which seconds before the goal he had a good PP chance at the side of the net. Pitlick has a really nice snap shot and I thought he was shooting a minute later when he slid a sweet pass to 2011 draft prospect Kale Kessey. Pitlick was thinking shot as well - as he told Guy and I after the game - but showed some nice vision by dishing off to a teammate. The fact the Oil 2009 pick Cameron Abney was barring down on him probably helped as well, but it was a great play nonetheless. The game didn't have a lot of physical play so Pitlick didn't have to throw his weight around to much, but in the few times it did get physical he held his own.

I didn't get to see Saturday night's game but Pitlick opened the scoring in Medicine Hat and set up the next 2 as the Tigers swept the Oil Kings in a much closer 6-4 win.

That gives Pitclick 6 points against the Oilers owned Oil Kings, and fellow prospect Tyler Bunz has a pair of 31 and 30 save wins.
Posted by Dean Millard @ 4:20 AM

6 points in 2 games. Looks like edmonton is the perfect team for breaking slumps. Just ask Iginla

Can't say I didn't have a similar thought as I watched the Tigers crush the Oil Kings on Friday.