News today out of the QMJHL that majority owner Bobby Smith is the new head coach of the Halifax Mooseheads. In a brief release today, the team made it clear that outgoing bench boss Cam Russell is still employed and will continue on in a key management role. 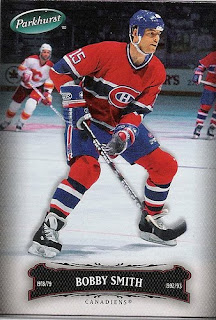 The release from the Mooseheads:

"Halifax Mooseheads Majority Owner Bobby Smith announced today that Cam Russell has relinquished his duties as Head Coach of the Halifax Mooseheads. Smith will take over the Head Coaching duties immediately. Russell will remain as the team’s General Manager in charge of player personnel and the draft.

“Cam has done a tremendous job replenishing our depth chart with talented young hockey players”, stated Bobby Smith. “It is now our job to make sure these players reach their potential. We owe it to ours fans to return to being an elite team in the QMJHL.”

Smith, a 15-yr NHL veteran who scored 1036 points with Montreal and Minnesota, will make his coaching debut Tuesday night at the Metro Centre against the Acadie-Bathurst Titan at 7pm."

Russell was on The Pipeline Show in September. Bobby Smith had a lengthy NHL career most notably as a member of the Montréal Canadiens and the Minnesota North Stars. He was chosen 1st overall by the Stars at the 1978 NHL Amateur Draft.

Neate Sager from Yahoo! Sports has added an update with quotes from Smith.
Posted by Guy Flaming @ 9:42 AM

Love the Hockey Card of Smith. Grew up watching him and the Habs. Hopefully he has a positive effect on the Herd.

Not completely unexpected, but a weird one for sure.

Russell remains as assistant coach, so he's in essence been demoted.

Russell also stays on as GM. He's done a alright job putting together a young team (aiming for the Memorial Cup bid in 2012), but now he doesn't get the chance to be at the helm while the moves he made start to pay off.

Part of this has to relate to the fact that Russell is also a minority owner of the team.