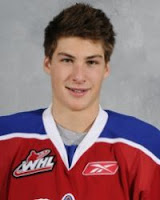 Every year Dean and I are fortunate enough to recruit a few NHL draft eligible players to do some guest blogging with us. The list of past players who have taken part include Jordan Eberle (EDM), John Moore (CLB), Ethan Werek (NYR), Mike Lee (PHX), Joe Colborne (BOS), Dylan Olsen (CHI), Mark Pysyk (BUF) and Brett Connolly (TBY).

We've already begun the 2010-11 series earlier this season with the first installment from USHL standout Seth Ambroz. Now it's time to hear from one of our favorite 'sleeper picks' from the WHL, local product Travis Ewanyk. You're not going to see his name on any 1st round rankings but we're quite certain that this is a player that every team will have on their list as a guy to target in the early/middle stages of the draft in Minnesota.

Here is the first chapter of the 2011 Guest Player Blog by 17-year-old forward Travis Ewanyk... 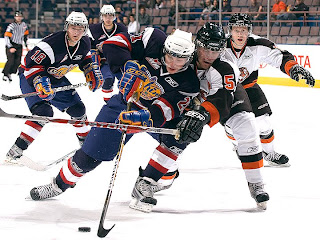 Hey, Travis Ewanyk here. I'm a local kid raised in St. Albert and am fortunate enough to be playing in my home town for the Edmonton Oil Kings of the WHL.

I first touched the puck around age 3 back in Vancouver where I was born, but played out my entire minor hockey league career in St. Albert. I was lucky enough to be on some great teams there over the years. Being in my hometown I get to have family support from my father (Dave), mother (Heide), and sister (Kala).

This is my second year with the Oil Kings, and after a disappointing season last year, the organization is now as a whole much improved all the way from the staff to the coaches and down to the players. We have a young team, but with that said we have the potential to be a very solid team in this league, and as the season goes on were going to get a lot better each day were together.

It's a really tight team in the room, and filled with great guys and strong leaders. I was given the honor of wearing an A for road games, and I have some great guys to look up to on the team to build on my leadership role.

I can't say enough good things about the group we have this year, and I am extremely excited to see where the season takes us. I also look forward to keeping you on track with what's going on with our team and myself, and hope you enjoy it as well!

Travis Ewanyk currently has 4 goals and 7 points in 13 games with the Oil Kings this year. He also leads the team with 33 PIM including 3 fighting majors (and no losses). He was chosen early in the 3rd round (48th overall) in the 2008 WHL Bantam Draft by the Edmonton Oil Kings and he dressed in 42 games last season compiling 5 points and 45 PIM. Ewanyk is listed at 6'1 and 185lbs.
Posted by Guy Flaming @ 1:24 PM