The Prince George Cougars and Edmonton Oil Kings have a lot in common, so it wasn't surprising that it took 64 minutes, 59.9 seconds to decide things at Rexall Place Monday afternoon in an 8-7 sloppy but entertaining contest.


Both teams have 18 year captains, Brett Connolly for PG and Mark Pysyk for Edmonton who both heard their names called in the first round this past June. Both teams have promising young 16 year olds in Troy Bourke (pronounced Burke) of the Cougars and Griffin Reinhart of the Oil Kings. Both teams suffered terrible goaltending Monday night, and struggled through awful seasons last year, yielding the Cougars the first overall pick in the bantam draft, while Edmonton selected one spot later. 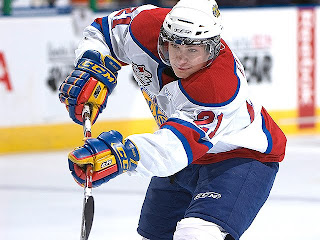 Monday night PG blew a pair of 3 goal leads, and watched Edmonton score 4 straight in a 5:35 span of the 3rd period to take the lead, led by 17 year old Travis Ewanyk and his hat trick. Sena Acolatse tied things up before overtime where Dylan Wruck ended it with a laser beam under the bar with .1 seconds to play, giving Edmonton a franchise record 5th straight win. 15 goals, 81 shots, 3 fights and some big hits, the only disappointing aspect was the crowd, as it seemed like only about 1500 people filed into Rexall Place on the holiday Monday.

Here some other thoughts from the contest:

Sena Acolatse and Camerson Abney have a combined 66 fights after Monday's game as the two heavyweights squared off early in the first. The Oiler prospect Abney popped Acolatse's helmet off with two punches but neither pugilist came away as the big winner in this tilt. 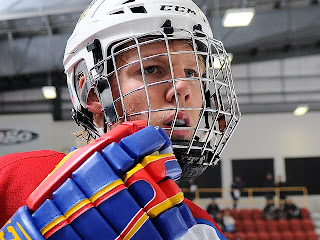 Griffin Reinhart is starting to get comfortable in the WHL. Today he was skating with more confidence and showed some great poise early on the PK. However he is still a youngster and youngsters make mistakes. Reinhart was -4 but had good company as Sabres first round pick Mark Pysyk was also 4 under for the round.

Cam Lanigan struggled in the Kings cage giving up 6 goals on 27 shots, however there were times when he was left hung out to dry. It seemed like the Cougars had free parking in his crease all day long. I'm sure head coach Derek Laxdal was hoping atleast one of his defenceman would give a Cougar or 2 a Sherwood tattoo in the back every once in while. Instead they (and every other team in the WHL the last 3 plus years) crashed the crease with reckless abandon..and it worked. 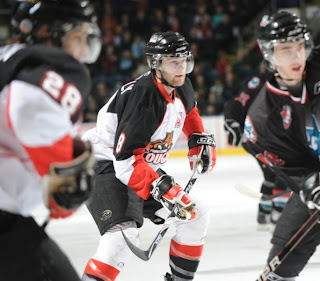 Brett Connolly was very good for the Cougars, especially in the early going. Oil Kings head coach Derek Laxdal said after the game, that you can tell just by how he skates that he's a high first round pick with confidence. Connolly might take longer then others to get to his top speed, but once he's there he's very hard to contain. He protects the puck along the boards, and knows where to be on the ice. 3 instances proved that today. His first 2 goals were scored by him driving to the net without the puck and staying there, providing traffic to force rebounds which he put away. In the 3rd the Cougars were on the pp and Connolly sat quietly in the corner while a scrum for the puck went on behind the net. For a second I was wondering why he didn't join in, then the answer came to me, as the puck squirted out right to where the Lightning prospect was waiting, almost as if he knew all along it was going to happen. (Photo Marissa Baecker)

Connolly was drafted this past June, so was his new Cougar teammate Martin Marincin. The Slovak blueliner was taken by the Oilers in the 2nd round and this was my first time to watch him live. The first thing that jumped out to me was how well he skates for a 6.04 guy not only learning a new style of play, but a new language as well. Marincin isn't a punishing body checker, but he doesn't have to as he's rarely caught out of position and uses his albatross like reach and mobility to break up plays. He also has a good hard shot, that doesn't take him forever to unload. In the 2nd period the left handed shot played the right side of the pp and unleashed a good low one timer for his 3rd goal of the season. In the 3rd he was able to get off another low and hard point shot that produced a rebound. Seconds later he showed he has very good instincts with a terrific pinch that kept the play alive and allowed Sena Acolatse to score the game tying goal. Marincin finished with a goal and assist and was +4.

Cougars defenceman Joshua Smith is going to be a fun guy to watch over the next couple of year. He just turned 16 nine days ago and isn't draft eligible until 2013, meaning at least 3 years of entertainment from the Lacombe, Alberta product. The 5.11, 185 lb rear guard racked up 24 minutes in penalties this year, giving him almost 50 in just 7 games. Last year with Red Deer of the Alberta AAA Midget league he piled up 140 sin bin minutes in just 29 games, and keep in mind fighting isn't allowed in midget. "A lot of roughing penalties" he said after the game. Smith kept the Oil Kings honest most of the game but saved his best for the 3rd period. He drilled Braeden Laroque in between the benches, then went looking for revenge after Adrian Van de Mosselaer absolutely crushed Spencer Asuchak just inside the Oil Kings blueline. AVD's hit was clean, but he was forced to answer for it when Smith dropped his gloves, which was his second scrap of the game. I asked him after the game if he ever looks to see who he's fighting, and yes he does, but only to find out what style he should use. I think he is going to make an NHL team very happy some day. He thinks he has a few inches of growth left in him and might have some decent offensive production.

Travis Ewanyk will be a captain in the WHL some day. Ewanyk will likely never lead a team in scoring, but he will lead them in other areas. Today he let his play speak volumes as he scored goals 1-2-3 on the season, helping Edmonton with their King sized comeback. Ewanyk is a heart and soul guy who never gives up on the play and has no fear of physical play. Oil Kings HC Derek Laxdall decided to move him up on a line with Michael St. Croix during today's game and it obviously worked. St. Croix is a good player who hasn't yet hit his full stride. The play he made on Ewanyk's hat trick goal was beautiful. He cruised through about 4 Cougars before sliding it cross crease for Ewanyk to tap it in. That's the part of the game that St. Croix has never had trouble with. Maybe he can learn from Ewanyk how to play harder without the puck, and maybe some of St. Croix's skill continues to rub off on Ewanyk.