Taylor Stefishen was hoping to graduate from Ohio State University at the age of 21 with a degree in financial planning. Ironically, his plan won’t happen apparently because of finances.

However his consolation prize is pretty good; Getting to play on a line with a 6th overall NHL pick as a point-per-game player.

We’ll get to that part of his life in a second, but first here’s how the North Vancouver product became a Prince George Cougar of the WHL.


After 2 seasons in the BCHL where he recorded 56 and 81-point seasons, Stefishen joined the Ohio State Buckeyes of the NCAA in 2008 after getting drafted in the 5th round, 136th overall, by the Nashville Predators. After 2 average seasons at OSU he was looking forward to his junior season with a new head coach behind the bench.

Stefishen suited up in the team’s annual Scarlett Vs. Grey intersquad game and thought he played “alright.”

Ohio State opened the season this past weekend with non conference games against Quinnipiac, but before that Stefishen and 2 others – senior Erick Belanger from Nanaimo BC and junior Mike Folkes from Burlington Ont - were summoned to 3 separate meetings with new head coach Mark Osiecki. Stefishen’s meeting lasted about one minute, and brought about bad news.

“He said ‘we’re going to have to release you’” Stefishen told me in a phone conversation this week.

I searched the OSU official website but couldn’t find anything about any cuts by the team. The only thing I found was this quote from the new head coach about the roster he inherited.

“Yeah, we have a lot of upperclassmen, I mean, 17 of them, which I'm trying to get to know each and every one of them. There'll be a couple of them that came back and did nothing this summer in terms of training-what kind of statement are they making to us as a staff?” 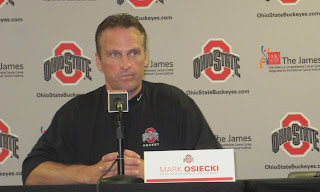 Hearing that quote from Osiecki’s conference call with the media makes me think the new bench boss had change on his mind. It’s what Taylor thinks, and that this was in the works for a while.

“It was embarrassing and disappointing, kind of a bitterness. I was drafted in the NHL and they redid our whole room and made a chart of all the players who had ever attended the school who were drafted in the NHL…and they left my name off it. That really kind of pissed me off, you know it was something that is an accomplishment for whoever does it and for them to not even acknowledge that I was even at their school or was even drafted was kind of a slap in the face.”

Stefishen along with Belanger and Folkes didn’t have their scholarship taken away, just their spot on the team after just a single intersquad game. No reason of performance was given, and Stefishen says none of them had any academic or discipline issues. It was simply a money and numbers issue.

“If you’re going to cut a kid and potentially ruin his career, I think he has the right to know more of the details on why that decision was made” Stefishen said. “If it was a money issue, I don’t think the player should be punished because someone over committed their money”

Belanger and Folkes are, as of now, still attending OSU, and while Belanger did tell me he was disappointed over getting released from the team he didn’t want to go into very many details. I suspect it has something to do with the fact that he’s still close friends and even roommates with some of the current Buckeyes and doesn’t want to rock the boat.

Stefishen’s story is a bit more delicate. Sure he could have stayed in school and continued his education, but without hockey. Yes he could have taken classes until Christmas in Ohio then transferred to another school and suit up next year on the ice, but how do you think the Nashville Predators would have enjoyed that? His only real choice of continuing his hockey development was leaving school and joining the team that drafted him from the WHL, Prince George.

Now far be it from this Canadian to tell someone who should and should not be on his team, but couldn’t this have been handled differently and with a little more of an explanation?

I tried to get one, but the phone call I made to Mark Osiecki wasn’t returned. If he does call me back, I will gladly pass on his response to this story.

Before you start thinking this is another Canadian bashing the NCAA, you obviously haven’t listened to our show or read this blog. Guy Flaming and I are huge supporters and proponents of college hockey, but as with everything else we have strong opinions on how to make the system better.

Why was this decision made in October when classes have already started? OSU starts later then most schools, and while Taylor has found a place to play, he’s lost this year of education, meaning he won’t be able to fulfill his original plan.

“That was the whole big plus side that I was going to graduate at 21 with a degree from Ohio State, but obviously that’s not the case anymore. I think next quarter I’m going to see how many credits transfer (up to Canada)”

Taylor would have preferred getting the news in the summer, so he could have at least made arrangements for schooling and to be able to start the season with his new team.

If a player is released by the team for the reasons given in these 3 cases, why can’t they transfer to another school and play immediately? Belanger and Folkes are too old to play junior hockey and have likely played their last true competitive game, but Stefishen isn’t. If he was allowed to transfer and play right away, he might still be getting the American education that so many NCAA backers brag about.

CHL detractors point out that you can’t get traded in the NCAA, but you can effectively be blocked from playing for any other school if your team doesn’t want you anymore. In the CHL if you get released, atleast there is the option of getting picked up by another team. It worked for Del Cowen last year who was cut from Brandon, but ended up in Calgary and skated in the Memorial Cup. Just this week 20 year old goaltender Jacob De Serres was waived through the WHL but caught on with the Saint John Sea Dogs of the QMJHL.

The NCAA route is great for many different reasons. This isn’t one of them. The rules need to be tweaked or else more Canadians might decide to stay and play in the Great White North where there seem to be more options.

As for Taylor, while he’s disappointed about how things ended, he’s not a basher of NCAA hockey.

“For me, I don’t know if I would have changed my decision to go to college because getting a degree is really important, but I think the WHL is going to be better for me, playing so many games.”

Especially when he’s riding shotgun with Brett Connolly, the 6th overall pick of Tampa Bay in this year’s NHL draft. Already the two have chemistry as Stefishen has 5 points in 4 games.