~
Saturday's show featured the debut of one of our new weekly insiders, we also pointed the spotlight on the NCAA's Ice Breaker tournament in St. Louis, we spoke with one of the 2011 players from the Saint John Sea Dogs and we were updated on the situation for the Oklahoma City Barons as the AHL season began.

Bill Scott worked inside the AHL offices last year but this season he's taken on the GM position with the Oklahoma City Barons, the minor league affiliate of the Edmonton Oilers. With the season starting later that night, we got a update on what the team would look like as it began their first season in OK City. Scott gave us a rundown on some of the line combinations we should expect to see and also on how some of the players have reacted since getting the axe from the NHL team at camp.

From OK City we went to St. Louis where Andy Baggot of the Wisconsin State Journal was taking in the NCAA's Ice Breaker Tournament. With the Badgers, Boston University, Holy Cross and Notre Dame on hand, Baggot gave us an over view of how the teams looked and also on the festivities for the weekend. Can Wisconsin overcome the loss of several key players and their former assistant coach Mark Osiecki? Do the BU Terriers look poised to return to the top of the Hockey East Conference standings? Who has stood out so far? Andy filled us in.

Then it was time to talk about the NHL, specifically in regard to rookies and sophomores. To do that we welcomed aboard Daren Millard of Rogers Sportsnet who will be with us every Saturday to help us discuss the impact of the youngsters in the NHL. We also asked Daren for his opinion on the Brendan Shinnimin hit in the WHL earlier last week and if it warranted a lengthy suspension as we saw handed out last year in the OHL and the QMJHL. 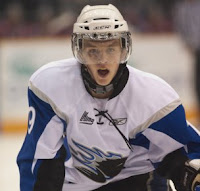 Finally, our 2011 NHL Draft Prospect for this show was Ryan Tesink of the Saint John Sea Dogs. The hometown kid was named first star in the Sea Dogs first home game this year and since then Tesink has put up numbers both offensively and a solid +11 rating. The smallish forward plays the role of the pest for Saint John and we asked him to tell us some of his strategies when it comes to getting under the skin of the opposition.

It was a busy show as Dean and I gave our opinions on the Shinnimin hit and covered more current events from the CHL, NCAA and pro ranks.