The NCAA season begins this weekend, highlighted by the IceBreaker in St. Louis featuring Boston University, Wisconsin, Holy Cross and Notre Dame. With a new season come new questions, especially considering how much rosters have changed for many teams since last year. That happens every summer but it seems to have really impacted some teams more than normal this year.

With that said, here are 5 stories I'm watching for this year in the NCAA...


5. Will the Gophers Be Golden Again? 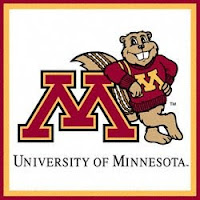 Last year was a season to forget for Minnesota. Sub-.500 for the first time since before Don Lucia got behind the bench, the Gopher's 18-19-2 record should provide the returning players and the freshmen class a more than reachable target for this year. The Gophers lost Jordan Schroeder, Nick Leddy and Josh Birkholz to the NHL and WHL as well as a few notable graduates including Tony Lucia and David Fisher. However, their incoming crop includes Nick Bjugstad (FLA, 1st round), Erik Haula, Max Gardiner and Justin Holl so there is talented help filling the holes. Goalie Alex Kangas is now a senior and is expected to be one of the best in the Conference. With several top WCHA teams looking like they might take small steps back after big losses, the Gophers should finish much better than they did in 2009-10.

4. Does Bemidji Sink or Swim?

Bemidji State joins the WCHA this year and after being the dominant team in the CHA for the past few seasons, no one doubts that they will find the road much bumpier this year. Without Niagara, Alabama-Huntsville and Robert Morris to feast on, Many expect BSU to struggle. I'm not so sure though. There are still weak sisters in the WCHA for the Beavers to sharpen their teeth against. No one is expecting big things from either Alaska-Anchorage or Michigan Tech and both the pre-season coach's poll and the media poll had them ranked ahead of Minnesota State as well. Matt Read is the obvious go-to guy for the Beavers and could get Hobey Baker consideration if he plays as well as he has in the past. They also have a pretty good coach in Tom Serratore. I think they Beavers will be OK.

3. Big Impact from the Big Chill?

I live in a country that largely ignores NCAA hockey despite the number of players involved who hail from Canada. I also live in a city where most of the population believe the Heritage Classic in 2003 was the first of its kind. Because most Canadians appear to be oblivious to NCAA hockey and the Cold War of 2001 seems to have been erased from the history books up here, I wonder how much of an effect the Big Chill at the Big House will have up here. Cold War II between Michigan and Michigan State will be played on December 11th in front of an expected crowd of 110,000 people at The Big House. Can an event of that magnitude really be ignored North of the border the same way the Frozen Four is each April? Attendance records will be smashed beyond belief with this one game and it's probably fair to say that the 2 outdoor NHL games, the 2 WHL outdoor games and the first outdoor junior game planned for this year will all have a hard time holding a candle to this grand daddy of them all. It's a Saturday night game so you know with Hockey Night in Canada it will likely get a mention between periods but will any network up here even be showing the game? (Seriously... I'd like to know so if you have an idea, tell me!)

2. Are Those Badgers or Skunks?

Outside of maybe R.P.I., I can't think of a program that has suffered more early defections to pro hockey than what the Wisconsin Badgers have undergone this summer. The list of departures includes Hobey Baker winner Blake Geoffrion, USA WJC leader Derek Stepan, big forward John Mitchell and top defencemen Cody Goloubef, Brendan Smith and Ryan McDonagh. Add to that pile the fact that near mythical defensive coach Mark Osiecki has left the program to become head coach at Ohio State and you have a completely new looking team. A weaker program might be devastated and set back for years by those huge losses but the Badgers will reply on strong netminding from veteran tandem of Scott Gudmandson and Brett Bennett to carry the load. Head coach Mike Eaves is respected throughout NCAA circles and if the Badgers do in fact take a step back this year (as one should expect) it probably won't be a massive one and it won't take Wisconsin long to get back to form. I don't think these Badgers will stink it up. 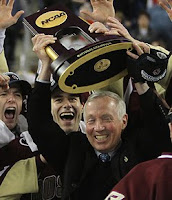 Boston is home to the last three National Champions and some pre-season polls have the Eagles ranked as the top team once again this year. That stands to reason - B.C. returns most their vaunted firepower and adds Kevin Hayes (CHI, 1st round) and Bill Arnold (CGY) to the fold this year. Netminder John Muse is entering his senior, and final year of an often stellar NCAA career. What's even scarier for the rest of the NCAA, most of BC's top talent are still either juniors or sophomores so the potential exists that the Eagles will be even better next year.

But there's another team in Beantown that will look to reclaim the throne. Boston University is only a year removed from the top of the heap and their freshmen class is one of the best in the country. Charlie Coyle (SJ), (ATL's) Yasin Cisse (now Yarin Ciss?), potential 2011 1st rounders Adam Clendening and Matt Nieto and RBC Cup winner Sahir Gill add an injection of skill and offence to the Terriers line up. With Kieran Millan And Grant Rollheiser in net, Alex Chiasson, Chris Connolly and Corey Trivino returning a year older... the Terriers could return to contention faster than expected despite their own key losses.
Posted by Guy Flaming @ 9:18 AM