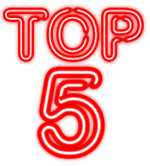 I couldn't be as specific in the title as I wanted to be but this Top 5 is limited to guys who either went really late in the NHL draft or didn't get selected at all. That eliminates the higher profile guys like Sam Brittain at Denver or a future high pick like Dillon Simpson going to North Dakota so don't be surprised when you don't see their names on the list.

Instead I picked 5 players, all guys I was able to see play in person prior to this year, that really caught my attention at the time and now I'm looking forward to seeing how they fair at the next level. 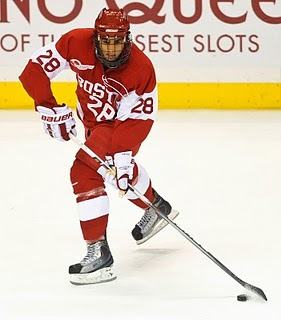 The first time I noticed Gill's name was early last year while he was still playing in the USHL. He was leading the league in scoring for a stretch and may have been when he left the Chicago Steel to return to the BCHL. He had 26 points in 26 games with the Steel then rejoined the Vernon Vipers where he'd play the year previous. Once back in Vernon, GM and head coach Mark Ferner made him earn every minute of ice time that he got. In the playoffs he found chemistry with the dynamic brothers Connor and Kellen Jones and it was during the Doyle Cup in Spruce Grove where I first saw that line play - and dominate. I had heard stories about his parents, especially his mother, being very involved in his decision making and that might have factored into his not being drafted by a NHL club in June.

Gill is now at Boston University and leads the team in freshmen scoring with 5 points in 3 games. The 18-year-old has a lot of talent but I've been lead to believe that there are questions about his level of commitment. So far so good for Gill at BU. (Photo: Isabel Slepoy/Daily Free Press) 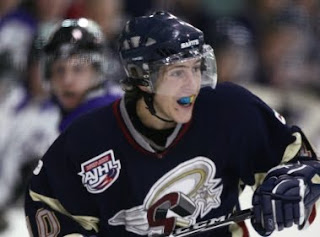 The 20-year-old forward played 3 years in the AJHL, all with his hometown Spruce Grove Saints. He's 6'2 and 200 lbs so he's got pro size and offensive production hasn't been an issue for him in recent years. He racked up 55 goals and 137 points with the Saints over his AJHL career which amounted to 144 games. Cameron was limited to just 31 games last year because of "concussion issues" but clearly that's behind him as he's off to a hot start this season with the Seawolves.

He's picked up 4 points in 4 games and is having great chemistry with fellow Canadian freshman Matt Bailey and sophomore Mitch Bruijsten who hails from the hockey hotbed of the Netherlands. 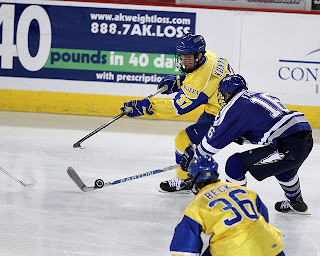 He was named the top Junior A player in Canada last season and now Cody Kunyk is having early season success with Alaska. Listed at 5'11 and an even 200lbs, Kunyk has scored twice in four games with the Nanooks. Last year he skated with the Sherwood Park Crusaders of the AJHL and totaled a rather impressive 87 points in just 51 games. There was some thought that if he might get drafted as a 19-year-old but that didn't happen and in the long run, a successful NCAA career for a free agent is a great thing because he then has his pick of teams and offers. We had heard that some teams were interested in Kunyk during the 2009-10 campaign but surprisingly, despite the accolades and awards, he wasn't drafted. We chatted with Kunyk mid-way through last season. (Photo: Nanooks Hockey 'mmf') 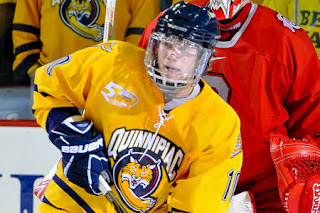 It might look like a cop out here but I'm slotting the twin brothers in so they can share the top spot. The pair played in the BCHL for the Vernon Vipers and helped lead the team to two consecutive RBC Cup victories in 2009 and 2010. Kellen finished the year with 52 points in 51 games and added 19 more in the playoffs for which he was drafted in the 7th round by the Edmonton Oilers. Brother Connor is actually the more prolific scorer judging by their history. Connor ended the season with 81 points in 51 games, (30 more than Kellen) and then outscored his brother again in the playoffs.

Both were in attendance at Oilers prospect camp in the summer and we spoke with Connor there and Kellen the week before after the draft. Both consider themselves to basically be Edmonton property right now considering Kellen's status with the NHL team and their desire play professionally together after their college days are over.

Speaking of the NCAA, the twins have a combined 6 points after their 3 games to start the year and they lead the Bobcats in scoring. (Photos: Quinnipiac Bobcats, BCHL)
Posted by Guy Flaming @ 10:47 PM

Heard the stories about his mother as well but sadly, this is very common. I worked in the Toronto scene for a number of years and there are no shortage of similar stories. Regardless, let's hope this is behind him.

He's got the skill and with the help of BU's strength & conditioning program (run by legendary Mike Boyle), Sahir has a legitimate shot to make a career in the AHL or overseas.

Worked with him all year last year. One of the most pleasant kids I've ever come across. In fact, that entire Spruce Grove team was well mannered. Brett has awesome hands but I'd like to see his frame fill out a bit more.

High on skill, short on size. No problem, Strength Coach Patel (like Boyle) is a leader in the field and will get them to where they need to be.

Nice, thanks for chiming in Jeff.