I just received a copy of the 'Players to Watch List' that Central Scouting has (or is about to) released today. A quick glance through is at first a bit disappointing because it's rather short. Then again, because it's largely a Junior A and High School list, most of the big names aren't on it.

Here's what jumped out at me...


First, this is taken from the release and will explain how Central has gone about ranking players:

We have not seen all the players in these various leagues as often as necessary to make final judgment, therefore, we may in the future update our opinion on these players and others prior to our Mid-Term Ranking Release in January"

It's a down year for the Alberta Junior Hockey League. Only two players have caught Central's eye and made the 'Watch List'. Sam Jardine of the Camrose Kodiaks, as expected, made the grade and is listed as a 'B' prospect. Jardine is off to Ohio State next Fall.

The only other AJHL player to get a mention is 'C' level prospect Jan Obernesser of the Brooks Bandits. The goaltender is just under 6'2 and currently has a 3.26 GAA and .887 sv%.

There is just one 'A' level prospect in the CJHL this year and he's in the BCHL. Destry Straight is a 17-year-old from West Vancouver has 22 points in 15 games with Coquitlam so far this season. So far he hasn't made his NCAA commitment so I would imagine he's got a lot of options out there.

There are a pair of 'B' players in the BCHL starting with Trail's Sam Mellor who is second in league scoring with 30 points. The 5'10 native of Cranbrook is slated to join Alaska-Anchorage next Fall. This is Mellor's second season with the Smoke Eaters, he put up 63 points in 59 games last year as a 16-year-old rookie.

Michael King is a big 6'4, 200 lb. defenceman with the Westside Warriors and also receives the 'B' level rank.

Trail has a trio of players given a 'C' ranking so I expect the Smoke Eaters will garner a lot of scouting attention this year with 4 players identified by Central.

The EJHL has two 'B' players on the list and both are eventually headed to the ECAC Conference. Charles Orzetti plays for the New Jersey Hitmen and is bound for Yale in 2012. Mike Seward will join Harvard next year but skates for the Junior Bruins right now.

The list for Eastern U.S. High Schools shows a pair of 'A' rated players in Connecticut. Philippe Hudon is a forward at Choate-Rosemary who is committed to Cornell in 2011. Peter Placek is a 6'3, 200 lb forward at Hotchkiss and is headed to Harvard next Fall.

Goalie Stephen Michalek is also headed to Harvard and is considered a 'A' goalie prospect by Central. He's currently playing for Loomis-Chaffe.

Defenceman Matt Killian is a 'A' level defenceman who plays for Delbarton. The 6'1 rearguard is off to Yale next season.

There are no 'A'-rated players out of Massachusetts, New Hampshire, New York or Pennsylvania this year. 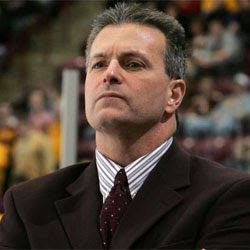 There is just one 'A' level prospect coming from Minnesota high school right now and that's Mario Lucia who plays for Wayzata. The 6'2, 183 lb left winger doesn't shown a NCAA commitment but his Father is the head coach of the Minnesota Golden Gophers and his brother Tjust wrapped up 4 years there too so...

There are 8 Minnesotans given 'B' grades.

If you have some knowledge of any of the players listed above or feel that Central missed someone... please share your thoughts with us in the comments section.
Posted by Guy Flaming @ 12:01 PM

aaaah....i was expecting their early season ranking. Do you have an idea when that will be out?

Those will have the CHL guys on it.