The 2009 NHL Entry Draft is 10 days away and while the names at the top of the rankings have been talked about to death there are several sub-categories that can be made which would contain players who haven't received very much publicity at all.

Like the Top 5 players out of U.S. High Schools.

Typically these players are located in either Minnesota or Massachusetts with a handful of notables coming out from New Hampshire, New York or maybe New Jersey. They will all have at least verbal commitments to NCAA programs but whether they will actually head the college route won't be assured until after the draft and a quick chat with the team that selects them.

That is the case again this year with the 5 names on my list. I'll briefly touch on some other guys in the sub-set after the top 5. 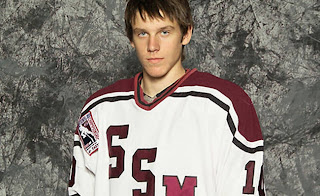 Haula played on the U17 and U18 entries for Finland so he's already building an international resumé to his credit. The Finnish forward is set to join the Minnesota Golden Gophers (no Canadians but a Finn, go figure) in the fall of 2010 so he's got another year of lower level hockey to play, likely in the USHL. The NHL team that selects him will do so knowing that he's a longer term project because of that.

"He's a decent player but I don't think he's got a lot of offensive upside," said a scout, "but he's pretty smart away from the puck and he knows what his responsibilities are. I don't think he'll be a top 6 guy but he could be a good 2-way player."

Another scout said he felt that Haula's development may have stalled playing at Shattuck because it was a step back from the level he was at internationally.

Prediction: 3rd or 4th round 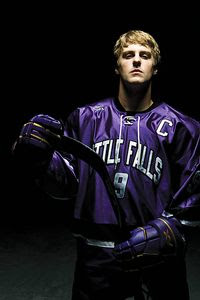 The problem with stats at the high school level is that it's really hard to get a sense of how accurate they are. Take Hanowski for example; he's now the highest scoring player in the history of Minnesota High School hockey. He's got above average size for his age group and obviously he's got the points to get him attention. So why isn't he ranked a lot higher than he is? (ISS 78th overall for example).

"He played in a weak division of the league and the teams in his division aren't very good," suggested one scout, "Don't take anything away from the kid because he broke all-time State records and he's got pretty good size and skates alright, but needs to be quicker. He's got a good shot and obviously he has a nose for the net."

"You look what he did in high school and he's going to St. Cloud where you have to hope that he gets an opportunity in an offensive role there because I don't think he can be a checker or play a 3rd line role," said a scout, "If he played at one of the bigger high schools in Minnesota and put up those points people would say he's a first rounder but his team was blowing their divisional rivals away like 10-0 so he was getting a boat load of points every night."

Sounds like a pick not without a certain amount of risk but a pretty intriguing upside to go with it. 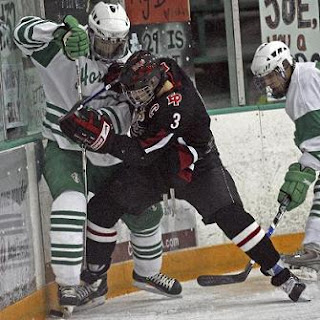 The mobile defenceman finished his third high school season with 37 points in 25 games. He's the top ranked high school player of 2009 according to ISS (21st overall). Leddy was named "Mr. Hockey" at the annual Minnesota State Tournament after showing off his hockey smarts and quick puck movement skills.

"He's not very big and he's kind of weak but in high school that doesn't really matter," said one scout. "He's got good skills and hockey sense. I would imagine he's a second rounder."

Another future Golden Gopher, Leddy (#3 in photo) should fit in well with an offensive system but is going to have to get a lot stronger to play at the pro level. On Monday, Leddy was one of 15 defencemen named to the World Junior Evaluation camp by USA hockey. 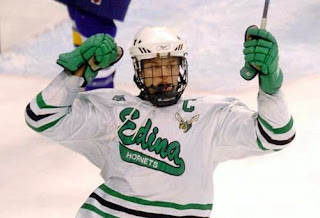 The two-sport athlete missed almost the entire year after he blew out his knee playing football. Despite the severity of the injury and resultant surgery and rehab, which has been given a total thumbs up, Budish is still getting consideration as a potential first round worthy player. He appeared in only 15 games but put up 27 points including 14 goals.

Both International Scouting Services and The Hockey News suggest that if not for the injury that Budish would easily be slotted in the first round. Apparently that wouldn't be a consensus though.

"I saw him play in August and in the Fall and I thought he was a good player but I didn't see him as a 1st rounder," said one scout I spoke with. "He seems like a third liner type of guy. I think it's the mystique of it because he's been hurt all year that his value has become a bit inflated."

His size advantage is obvious and his strength has served him well at the high school level. On the downside, his skating is viewed as a weakness but considering his path to the NHL could include 4 years in college, he'll have plenty of time to address that issue. The Minnesotan has NCAA aspirations that will keep him in-State as he heads to join the Golden Gophers next fall. He will also be a guest on The Pipeline Show tonight! 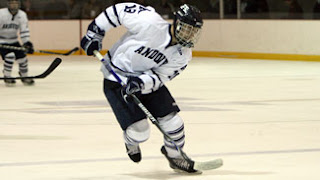 One of the players who is seeing his stock rise as the draft gets closer and closer. He already has NHL speed but it's his acceleration out of the blocks that is really catching the eye of the scouting community. Kreider (pronounced Cry-dur) is firm in his commitment to Boston College despite an opportunities in both the QMJHL and the USHL. He's busy trying to finish his high school courses ahead of time to possibly join the Eagles this fall.

"What a bright kid this is. Well mannered, well spoken , extremely intelligent... he's just a really sharp and complete kid, " said one scout. "He's going to play because he's arguably one of the two or three best skaters in the entire draft, but I'm not sure if he's got enough natural ability to play in your top 6. He scored a ton of goals but he had enough chances where he could of had twice as many goals than he actually did."

Kreider isn't a guy who makes excuses or looks to pass the buck. When he was on our show a couple of weeks ago he spoke honestly about being intimidated at the NHL combine being surrounded by CHL or Euro players who have been playing on the international stage or in much bigger events than he has. He's humble and genuine. And how many kids decide to take up the Russian language simply out of boredom?

Mac Bennett (D) - A 2-way blueliner from Hotchkiss in Connecticut with good mobility and size. Headed to Michigan to play with the Wolverines in 2010-11 after a season in the USHL next year. "He does everything pretty well but doesn't do any one thing that I would describe as great." - scout

Alexander Fallstrom (RW) - A swedish overage product that went undrafted last year but may get a second look after an 80-point in 48 games at Shattuck-St. Mary's. At 6'2 and 192 lbs he's got the size but apparently not the rest of the package. "He's a year older so he should be dominating at the high school level." - scout

Alex Velischek (D) - Headed to Providence in 2010. The son of former NHL player Randy Velischek and plays at Delbarton in New Jersey. "That could be one of the worst high school leagues in the nation, it's God awful. He doesn't have great size but he has bloodlines because his dad played. He's definitely a raw project." - scout

Thomas Larkin (D) - at 6'4.5 and 206 lbs, this high school kid jumps off the stats sheet. He also had 46 points in 31 games for Exeter in New Hampshire. Headed to Colgate in the ECAC which won't help his stock any. "His skating is pretty awkward and he gets by at the high school level with his smarts and he uses his size really well." - scout 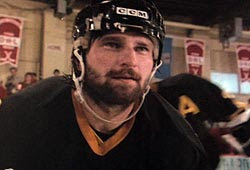 Luke Curadi (D) - Here's someone who will get drafted for no other reason than his size; 6'4.5 and 250 lbs! He only played 38 games this past year but he had 167 PIM. Apparently moving up to play in the BCHL with the Penticton Vees next year. "He's big, he's tough, he plays with a real attitude and just runs around and bangs guys and slashes guys. He reminds me of Carl Racki in Youngblood." - scout

Nick Sorkin (LW) - Here's an interesting player out of Midget hockey in Maryland. He's slated to join New Hampshire in 2010 (or 2011) so he's really a long-term project but he put up 101 points in 50 games last year. He's 6'1 but only 160 lbs so far. Possibly a guy that the NHL team coaxes into heading north to the CHL for better competition. "He's got a good shot and pretty good hands and he skates well enough to play on the big ice at UNH." - scout

I actually selected both Sorkin and Curadi in a mock draft I participated in recently.

I get the sense that Sorkin might be a bit of a sleeper/late round steal. It will be interesting to see where he gets draft (IF) and then to follow him over the next few seasons.

Definitely a long-term project but could end up a top 6er.

First, he didn't play at all this past season with Edina. The numbers you've posted was for a pre-season league that he played in.

Second, you failed to mention a big reason WHY many scouts are so high on him. He led Team USA in scoring at last year's Ivan Hlinka Tournament and in the process impressed the scouts in attendance with his size and skill set.

The MNHS Class A/AA league has some other great kids that could also be potential draft picks. One of my draft "sleeper" picks is Max Tardy out of Duluth East HS. Not a real high-end kid, but can score. He's also got speed and a bit of nastiness to his game too. BTW, Max has committed to Minnesota-Duluth.

And yes, I saw pretty much all of the MNHS Class A/AA kids this past season. FYI, Shattuck's is not (technically speaking) part of the Class A/AA league.

Thanks for the additional info DJ.