Over The Line Smokey

The title of this blog and the picture to your left is one of the funniest quotes from what might be my favorite movie, The Big Lebowski. It's when Walter Sobchak (John Goodman) accuses his bowling opponent Smokey of stepping over the line while pin seeking. It turns into a hilarious scene where Sobchak refers to Vietnam and pulls out a gun. Classic.

What isn't so funny is how one NHL team went "Over the Line" in my opinion at the recent NHL combine. During one of his interviews, Slovakian forward Tomas Tatar was allegedly asked if he was GAY. A Hockey's Future poster has translated the interview and you can read the article here. Here is the part I am referring to:

Q. Did you get any unusual questions?

A. There were a few. I thought I didn’t properly understand what they were asking when they asked if I was married with kids and if I was gay. I calmly answered all questions

Listen, I know there are some odd ball questions out there, but what the hell does anyone's sexual orientation have to do with being a good hockey player???? I think whatever team asked this question is very wrong. 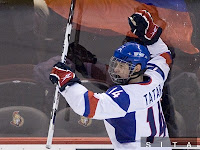 Now this might be a stretch and you might think I'm going overboard with this, but just hear me out. What if Tatar answered yes to the question, and the team that asked him didn't draft him. Could he sue them for discrimination? I mean you can't ask that in a job interview, and basically that is what the combine interview is. If Tatar doesn't go in the first round, and subsequently doesn't get first round money, could he sue for lost wages???

The NHL team in question is on a slippery slope with this one in my opinion. Am I being to sensitive or blowing this out of proportion? Let me know.
Posted by Dean Millard @ 2:00 PM

Great post - not out of proportion at all. Honestly, it's a real problem in both the culture of hockey (and sports more generally) and in the labour force of Canada and the United States.

Thanks and keep up the good work!

Absolutely agree. I'm not naive enough to think an NHL team would be open to the idea of a gay player, but they still don't have any right to ask.

I think it's clear what the NHL team was trying to do with the question.

1) They were testing his maturity level. If he answered the question, "eww gross no," then I believe that would tell them about said players maturity level. However if he had answered "no, that is not a life choice of mine, but I hold nothing against those who do make that choice," that would give them a good indication he's pretty level headed.

2) All these odd ball questions are used to get players out of their comfort zone and push their boundaries.

THAT BEING SAID, I agree completely that the question itself was off base. A much better way to approach the topic and decipher a player's personal maturity could have been asking "how would you feel and react if a player on your team was openly gay?" That question there would give them the same type of response they'd be looking for, but at the same time respecting the personal privacy and boundaries of the specific player.

I have the image in my mind where Tatar walks into a room full of people and before he even sits down, Brian Burke grunts the question at him.

I'm quite sure that in a regular job interview that kind of question would get the prospective employer into trouble, but are the pre-draft interviews equivalent? I guess that's one for the courts to decide...

That's not just an odd-ball question, it's actually potentially illegal. Were I a prospect, I might reasonably consider the combine to be effectively a job interview. In many provinces, that question is strictly verboten, and I'm sure the same holds true in many states.

Whatever team decided to ask that is opening themselves up to a lawsuit and / or a human rights complaint, and they would probably lose.

And I should have read Eetu's comment first, since he said more or less what I did. :)

Ooooo, I don't like this. Those questions really aren't the clubs business.

Not a bad way to test his maturity, I suppose, but not the right way to do it. Strange question. Are these folks not aware of law?

Thats what I love about hockey, they just throw out that politically correct non-sense right out the window.

mundo, I really hope for your company's sake that you're not in a management position. In fact, I hope that for the sake of your notional employees too. Were I your manager, I'd consider throwing your nonsensical butt right out onto the curb before you got *me* into trouble.

Get with... well, the mid 20th century, at least. In what world is it "PC" to say "the sexual orientation of your employees, current or future, is nobody's business but their own"? Should companies be able to ask you, if readers will pardon the not-PC terms, "So 'mundo', how many times do you pork your wife a month," and then record your answer?

Oh, you're not married? Somehow I'm not surprised.

Totally out of line. That club had no right asking it and I wish Tatar had "outted" them. I'd love to know who it was.