Coming Down the Pipe – Where once there wasn’t much for ‘Canes fans to look forward to, now there are some legitimate future stars in the pipeline for Carolina. The list may be short but it’s definitely heavy at the top. Sutter has made his NHL debut and Boychuk had a 2-game cup of coffee but both should be big players for Carolina sooner as opposed to later. Drayson Bowman may have been a bit of a late bloomer but ended his WHL career with two solid campaigns in Spokane. Wisconsin alum Jamie McBain led the Badgers in scoring last year before bolting for the pro ranks as a junior. Mike Murphy ended his OHL career in Belleville as the league’s top goalie.

Draft Trends – The WHL and OHL have been a favourite stomping ground for Carolina as of late as the two leagues have produced 8 of the club’s last 10 draft picks. The only non-CHL pick was Zac Dalpe who, before the 2008 draft, many expected to pass on Ohio State and hook up with the OHL’s Plymouth Whalers. Carolina hasn’t selected a European since 2005. 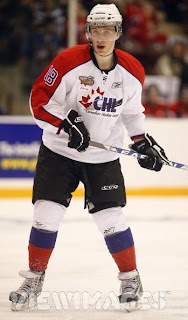 Millard: Carl Klingberg - The 6th Swede I project to be taken in the first round gives the ‘Canes a good-sized power forward at 6.03, 205.

Flaming: Carter Ashton – Carolina has looked to the WHL 4 of the last 7 years with their 1st round pick. A Zack Boychuk teammate in Lethbridge who also happens to have size, hands and NHL genealogy makes for an interesting possibility.
Posted by Guy Flaming @ 6:00 AM