Coming Down the Pipe – Deep on the blueline; that’s how it appears for the Ducks who have a young Brendan Mikkelson leading a pack that includes Mark Mitera, Brian Salcido, Brett Festerling and Badgers freshman Jake Gardiner. Speed demon Brandon McMillan was even converted from the wing to the backend in Kelowna this past year although reportedly the Ducks still see him as a forward. There is potential up front but Logan Macmillan and Josh Brittain had forgettable seasons. Matt Beleskey has taken a step forward. Anaheim had two goalies battling it out in the QMJHL final with newly acquired Timo Pielmeier losing to Marco Cousineau. Goalies are OK but no sure-fire NHLers in the bunch.

Draft Trends – New GM Bob Murray was a key man at the draft for the Ducks over the last few years. He’s also shown a knack for finding un-drafted NCAA talent – does he flex those strengths at the event itself now as the boss? One might wonder if the Ducks are allergic to Russians – they haven’t selected a single one since Stanislav Chistov in 2001. One pattern that seems to have developed is that Anaheim can be expected to draft North American early and end with a sleeper out of Scandinavia. Half of the players from Anaheim’s last 3 drafts have been out of Canadian Major Junior. 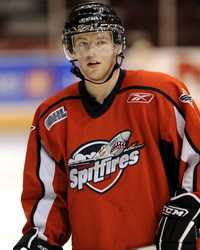 Millard: Scott Glennie-The Ducks love big forwards with skill. Check, check and check with the Brandon Wheat King. He isn’t a power forward but uses his size to create offence.

Flaming: Ryan Ellis – Not that the Ducks really need blueline prospects but, despite his size, I don’t know how much farther Ellis slips. Knowing how much offence from the blueline can mean, Anaheim takes the Niedermeyer-ish scoring machine of the OHL.
Posted by Guy Flaming @ 6:00 AM

Eric O'Dell has taken a step forward all the way to another organization, he was part of the deal that saw Erik Christensen come to Anaheim from Atlanta.

Thanks... serves me right for writing something in the wee hours.