Coming Down The Pipe: The Hawks resurgence in Chicago has been led by 2 guys who could still be playing junior and college hockey. What's even more of an embarrassment of riches for Chicago fans is that if Kyle Beach and Akim Alui can avoid future food fights (the reason they were sent home from Norfolk this spring) then the Hawks could add size and speed to their already impressive roster. Speed is also what Billy Sweatt will bring when he leaves Colorado College.

Draft Trend: It will be the first time since 2002 that the Hawks' first selection is in the second half of the first round. Chicago's last four 1st round picks have all be forwards but they chose 5 defencemen last year alone. Only one of their last 14 picks has been used outside of North America. 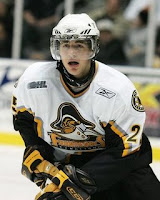 Flaming: Stefan Elliot – The Hawks have had so many top picks over the last several years that they’ve been able to take risks with some of their choices. In Elliot they get a world caliber defenceman and a character guy as well as the WHL’s scholastic player of the year.
Posted by Dean Millard @ 6:00 AM