Coming Down the Pipe – The Flyers have another wave of youngsters ready to take the NHL by storm led by Claude Giroux who had more than a cup of coffee with the big club last season. James vanRiemsdyk and Andreas Nodl up front with Luca Sbisa and Ryan Parent on the back end give the Flyers a full line of near-rookies that could all be impact players. The Flyers have been an exceptionally strong drafting club for a long time except in one area: goalies. Philly holds the rights to an array of netminders but none come with the billing of a future starter. The last successful goalie selection by the Flyers came in 2000 in the form of the overage Roman Cechmanek.

Draft Trends – Philly has picked 7 times in the first two rounds over the course of the last 3 drafts and have taken 4 defencemen. Not since Joni Pitkanen in 2002 have the Flyers used their first pick on a player from Europe. The QMJHL has been a favourite league to look at, especially early in the draft during the first two rounds. 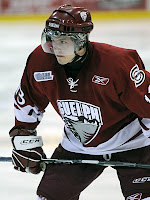 Millard: Edward Pasquale -The first goalie of the draft goes to the Flyers who take a puckstopper in round one for the first time in ten years. They’re banking that Pasquale is the next coming of Ron Hextall who was the last successful homegrown goalie in Philly.

Flaming: Peter Holland – My head is telling me Philly looks long and hard at QMJHL goalie Olivier Roy but their history with drafting goalies has me second guessing myself. The Guelph forward has drawn some comparisons to the junior version of Jeff Carter… and as a NHL player he’s worked out pretty well for the Flyers so far.
Posted by Guy Flaming @ 6:00 AM