Coming Down the Pipe – Detroit is notorious for being extremely patient with their prospects and because they always have an elite team at the NHL level they can get away with stashing players on the farm allowing them to develop slowly. Players like Darren Helm and Justin Abdelkader would probably already be in the NHL if they were with most other organizations. Defenceman Jakub Kindl might be in the same boat. The Wings have a couple of quality netminders in the system with Jimmie Howard and Daniel Larsson. Thomas McCollum had a year to forget but has the potential to rebound.

Draft Trends – Detroit has the reputation for mining Europe (and Sweden in particular) and uncovering franchise players. That has happened in the past but it’s been since 2004 that the Wings took Johan Franzen, the most recent selection fitting that description. Detroit hasn’t drafted a Euro with their first pick since Kindl in 2005 but they have selected at least one Swede in every draft since 1993. 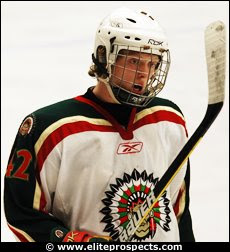 Millard: Toni Rajala - His great outing at the U-18’s is enough for the Wings to overlook his small stature.

Flaming: Carl Klingberg – Maybe a bit stereotypical to predict Detroit taking a Swede but why deviate from a successful track record and this is one of the best classes ever for that country. This power forward’s stock appears to be on the rise.
Posted by Guy Flaming @ 6:00 AM