~
The Pipeline Show is excited to bring you a series of guest player blogs by some of the top players eligible for the 2009 NHL Entry Draft. For a complete recap of the blogs so far, click on '2009 Guest Blogs' under 'Labels' down the right-hand side of your screen. To date we have heard from John Moore from the Chicago Steel in the USHL, Ethan Werek of the Kingston Frontenacs, Fargo Force goalie Mike Lee and Dylan Olsen of the Camrose Kodiaks. 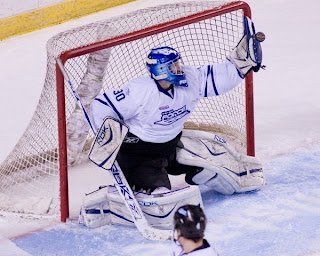 Hi this is Mike Lee checking in again for The Pipeline Show.

I am writing this from Colorado Springs where I was lucky enough to be invited to USA Hockey's Annual Congress to accept the Dave Peterson Award.

I was at the NHL Combine about a week ago, and what an experience that was! I arrived in Toronto on Wednesday afternoon, and I jammed the whole experience into less than two days because of the NCAA rules. It was nice to have all of the rest of the college guys out there at the same time, because we were all going through the same thing with everything being crammed into those two days.

After checking in at the hotel and getting registered, I finished Wednesday off with a few interviews followed by dinner and the Stanley Cup playoff game with a couple of other guys from Minnesota. Thursday was a full day of interviews, and I hardly even had time to eat. Friday included the dreaded workout. It was interesting to go through all of the medical testing as well as the physical workout, and it is good to know that my body works the way it should. 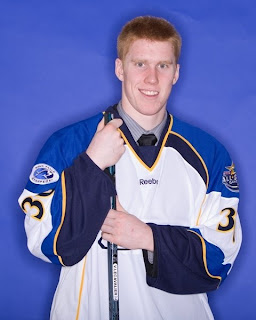 I tried to play it smart for the bike tests by not eating breakfast and only drinking water because of all the stories guys tell about not being able to keep it down. Fortunately, that move paid off as I was able to keep my insides in, though it seemed they wanted out for a while.

Overall, I am very happy with how the combine went for me. I was very comfortable with the interviews I had and thought I did a good job with handling some of the odd questions I got. As far as the testing goes, I gave it my all, and that's all I could do. I didn't have a lot of time to train for the specific tests, but thankfully I have enough athletic bones in my body that helped me get through everything pretty successfully.

Altogether, the combine was a great opportunity. I am very honored that I was invited and that I was given the chance to visit with all the teams out there. Right now, I am getting busy with my summer training, and I am looking forward to the Draft at the end of the month.

Mike Lee is ranked as the 4th best goalie available in 2009 by International Scouting Services (Final '09) and 4th in North America by NHL Central Scouting (Final rankings). The 6'1 and 185 lbs netminder ended the year with 26 wins, a .918 sv% and a 2.40 GAA in 48 games for Fargo in the USHL. He also played in the USHL All-Star game as well as the 2008 WJAC Challenge in Camrose, AB where he represented the United States and backstopped them to a gold medal finish. To cap off the season, Lee was given the Dave Peterson Award by USA Hockey as the nation's top junior goaltender. Lee has a signed letter of intent to attend St. Cloud State University beginning next season.

I would never draft a goaltender in the first three rounds. Never. Way too hard to project the vast majority of them, their development is so different from the skaters.

I would never draft a Mark-Ryan in the first three rounds. Never. Way too cocky, think they know it all when they're really probably a junior mighty-mites girls hockey coach for an Under-10 league.

Whats with the hate? If you want to argue, argue the point, would be more interesting to read...