Moore From the Pipeline - Part 4

~
The Pipeline Show is excited to bring you a series of guest player blogs by some of the top players eligible for the 2009 NHL Entry Draft. For a complete recap of the blogs so far, click on '2009 Guest Blogs' under 'Labels' down the right-hand side of your screen. To date we have heard from John Moore from the Chicago Steel in the USHL, Ethan Werek of the Kingston Frontenacs, Dylan Olsen of the Camrose Kodiaks and netminder Mike Lee of the Fargo Force.

One note before we get to Moore's latest blog... Yesterday we were directed to a story out of Colorado Springs in regards to John Moore's intentions for next season. The brief story (see HERE) makes the following assertion: "Moore expressed that he is definitely coming to CC in the fall."

As we keep in fairly regular contact with Moore, this news came as a bit of a surprise since the last time we had spoken, John made it clear that any decision on that subject wouldn't be made until after the NHL Draft. At that time, with the input from his new NHL team, his advisor and his family he would then weigh his options and come to a conclusion.

Here now is the latest installment of Moore From the Pipeline written by the player himself: 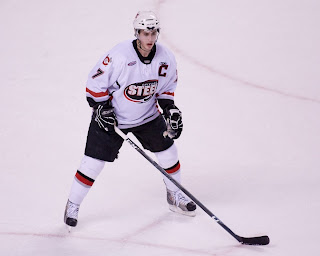 Hi this is John Moore checking in again. I just got back from the combine and I will give you guys some insight into my experience up in Toronto.

I flew out Wednesday morning and landed in Toronto at around noon. The Western Bristol Place, the hotel that the combine was being held at, is literally across the street from the airport and they had a shuttle bus that was taking players from the airport to the hotel that I jumped on. Upon arriving at the hotel, players were directed downstairs to the check in where we received our workout shirts and shorts, interview schedules, and room keys.

It turned out that I had 28 interviews, nine on Wednesday and 19 on Thursday so I would be a busy man due to the NCAA’s rule that college players are only allowed 48 hours at such an event.

I grabbed a quick bite to eat and then got a short nap in before my interviews began at 3 o'clock. While I was getting ready, I got a phone call from Leafs TV who needed me to do a quick interview for them. I thought that it was pretty cool and I did that just before my first interview with the Florida Panthers at 3:10. I was definitely nervous going into my first couple interviews but as I went along I became pretty comfortable.

My last interview of the day, with the Toronto Maple Leafs, gave me the most entertaining question of my two days. I was given a piece of paper with three people pictured—Sean Avery, Anna Kournikova, and Barack Obama—and asked to rank in order who I would want to have dinner with. My order was Obama, Kournikova, and Avery.

Once I finished, my family advisor, Wade Arnott, took me out to grab a bite to eat at a place just down the street from the hotel where we watched the Hawks-Wings game. I got back to the hotel once we were done there and was lights out the second my head hit the pillow.

I woke up early Thursday morning and grabbed a bite to eat and some food to store in my room for the day. I had 19 interviews from 8:30 am to 5:35 pm with no breaks so I was just hoping to get to the finish line. For the most part, all of the interviews went very well. However, the Boston Bruins were pretty rough. I walked into their conference room and was sitting in front of about 20 scouts and management personnel. To top it all off, Cam Neely was sitting at the head of the table just staring me down the entire 25 minutes. They fired off one question after another and really just tried to get me going. I had to toe a fine line and be respectful, but at the same time you need to stick up for yourself as they are really just trying to get you out of your comfort zone. By the time I was done with my interviews I was pretty relieved and my roommate and I, (Phil Samuelsson), grabbed a bite to eat. We got back to the hotel at around 7:30 and words cannot describe how tired I was. I had my fitness testing the following morning at 7:15 and so I called it a night and was lights out by 8 pm.

I got up at around 5:30 in order to get a good meal in before the testing. I was told to keep it light on account of the two bikes that have a tendency to bring a meal back up. The first part was a thorough physical evaluation that took about an hour. From there we went upstairs to the actual testing room.

I will never forget this moment for as long as I live.

I walked into the ballroom, which was overflowing with scouts, GM’s, and media. It definitely got your heart racing and it was a lot of fun. If I had to describe it I would call it a meat market as they were examining every prospect from top to bottom. The testing concluded with the notorious Windgate and VO2 max, which looked pretty ominous sitting front and center in the room. The first of which, the Windgate, is a 30 second sprint with a lot of resistance. It was everything it was billed as and was pretty tough. 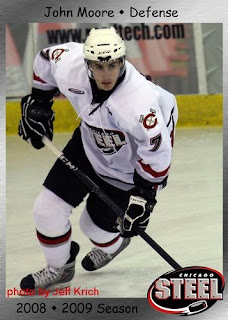 Next, the VO2 max is more of an endurance test. You have a tube in your mouth and can’t breathe out of your nose. I thought I did pretty well here and once I was done I was taken to a computer to do a psychological evaluation. When this was done, I went to a room where all of the players were catching their breath, stretching, and grabbing water. I sat down and was talking to Jordan Schroeder. He told me that he threw up after the Windgate and felt a lot better. In the middle of our conversation I had to sprint to the trash barrel and do a little throwing up myself. I was exhausted both physically and mentally and it was nice to have all of the testing behind me. Once I pulled it all together, I went upstairs to the media room and did a couple of interviews with some writers and one or two cameras. From there I hustled up to my room, showered and threw all of my stuff together and was out the door as I had to catch my flight back home to Chicago.

Looking back on my experience I had a wonderful time. It was a great opportunity to interact with not only the NHL teams but also with the top players in the world at my age level. It was a very neat experience and I had a tremendous time.

John Moore is ranked 16th overall by International Scouting Services (Final '09) and 6th in North America by NHL Central Scouting (mid-term rankings). The 6'2 and 189 lbs defender currently has 14 goals and 39 points in 57 games this year with Chicago in the USHL. Moore is currently weighing his options between following the NCAA route to the NHL via Colorado College or through the OHL with the Kitchener Rangers who drafted him in early May.

So in the first part of the blog entry, you write "...that he has not made any kind of firm commitment to Colorado College nor to the Kitchener Rangers."

Yet on the last part of the blog
entry, you write "Moore now faces the decision of following through on his NCAA commitment to Colorado College"

So, which is it? I think the first part of the blog entry could possibly be rephrased to indicate that "Accordin to John, certain comments in the linked article may have improperly been attributed to him. He has committed to playing for Colorado College next season just as long as Kitchner and the holder of his NHL rights cannot convince him otherwise."

He has a written letter of intent to Colorado College. As we've seen in the past with several players, this is hardly a 'firm commitment'.

I'll adjust the ending to satisfy you but certainly not in the manner you have suggested.