Coming Down the Pipe – Most organizations can only wish their prospect depth was on par with what Nashville has been able to assemble in recent years. Their NHL blueline is already strong and has Jonathan Blum, Cody Franson and Swiss-product Roman Josi waiting in the wings. Chet Pickard is destined for the starter’s job and yet Jeremy Smith could develop into solid competition for him in net. Up front the Preds boast size and character but could arguably use some high-end skill to go along with blue-chipper Colin Wilson.

Draft Trends – Only once in their history have the Predators taken a European in the first round, that being Alex Radulov in 2004. Is it a coincidence that 2004 is also the last year that Nashville has drafted a Russian? It’s hardly a hole in their prospect system but Nashville has only drafted 4 blueliners with their last 21 picks (2006-08). They also haven’t drawn from the QMJHL since 2004. 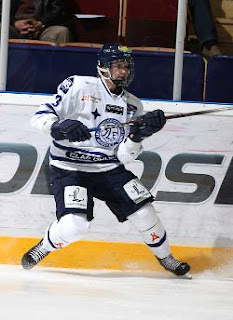 Millard: Louis Leblanc - Nashville has drafted D-men and goalies galore lately so taking a decent sized Centerman will be music to Music City’s ears. He hasn’t received a ton of attention because he plays in the USHL and is going to Harvard next year; the Preds have a ton of prospect depth so they can wait.

Flaming: Oliver Ekman-Larsson – The Predators have few (if any) holes in their pool of prospects but have only drafted three defencemen of note in the last 5 years (excluding the now traded Ryan Parent). Despite what I said under ‘trends’ in regards to picking rearguards, the Best Player Available policy says they can’t resist a player many pundits consider to be worthy of the top 10.
Posted by Guy Flaming @ 6:00 AM

I would not be surprised to see Nashville draft a defensman. I think Franson is going to graduate to the bigs next year Josi is going to spend another year in Europe and Blum needs to sit on a couple of HGH needles. Also look at the patern of 1st round picks; even years it's a forward, odd years defensive player.

I don't get how the Oilers pick OEL and the Preds too?

Millard has the Oilers picking OEL, I have them picking Moore.

Millard has Nashville picking Leblanc, I have them picking OEL.

Whoever writes the piece attaches the photo of their choice... hence, the same player pictured in the last two.

Didn't catch that. My bad.