The CHL import draft is underway, and while the Edmonton Oil Kings aren't overly concerned without a pick in the first round, their parent club the Oilers were watching closely.

When the number 14 selection rolled around the Red Deer Rebels decided not to use it, but rather wrap it in a paper airplane and sent it across the prairies to the Brandon Wheat Kings.

The day began when Brandon general manager and head coach Kelly McCrimmon acquired Medicine Hat’s first round pick (44th overall) in exchange for a sixth round bantam pick in 2011 or a flip of first round Import picks in 2011.

The Wheat Kings then traded that pick as well as 20-year old veteran Nathan Green to the Rebels in exchange for the fourteenth overall selection. With that pick, Brandon took the 5’10” 163 lb. Rajala 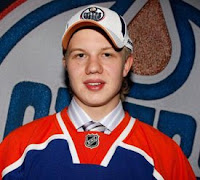 So with the 14th pick, the Wheat Kings grabbed Finish scoring sensation Tony Rajala. If that sounds familiar, it's because the Oilers just selected him in the NHL draft over the weekend. To read a complete review of Rajala and others click here. While it would have been nice to see him quite often here with the Rebels or down highway two in Red Deer, it should mean - barring a trade or injury - that he'll get to suit up in The Memorial Cup this May as the Wheat Kings are hosting it. However it will depend on the contract status of Rajala in Finland. To me though getting a chance to get used to North American hockey and play on a big stage should be enough to bring him across the pond. If it happens It will mark the second straight year an Oilers prospect has played in one of The Pipeline Show's four majors, with Phillipe Cornet skating with Rimouski last year.
Posted by Dean Millard @ 10:14 AM

Didn't I read that Rajala is planning on staying in Finland for a couple of years? I hadn't heard that he was interested in coming to the CHL.

Details on the deal: Nathan Green for the 14th pick.

good point anon....quite honestly I never considered that, simply because playing in NA getting used to this style of hockey and for the Memorial Cup, seems like the best career move. We'll have to see.