Coming Down the Pipe – The Blueshirts have a bunch of Europeans that lead their future forward crop and unlike a lot of clubs, there is apparently no concern about having to convince them to come to North America. Russian Artem Anisimov bucked the stereotype of Russians who refuse to play in the AHL and his fellow countryman Evgeny Grachev had a strong year in the CHL with Brampton. There is good depth among the future Rangers rearguards led by Bobby Sanguinetti, Michael Del Zotto, Michael Sauer and Tomas Kundratek. Matt Zaba and Miika Wiikman are the top goalies in the system and while interesting, aren’t expected to be franchise starters by any stretch of the imagination.

Draft Trends – Like I mentioned, the Rangers have no qualms about drafting Euros because they know that the notion of playing in New York is an attractive selling feature all its own. As a result, 9 of their last 20 picks have come from outside North America including the late Alexei Cherepanov. New York doesn’t appear to have much luck with drafting goalies recently; Al Montoya was taken 6th overall but fizzled as a pro and Antoine LaFleur was a 2nd round pick in 2007 that was never signed. 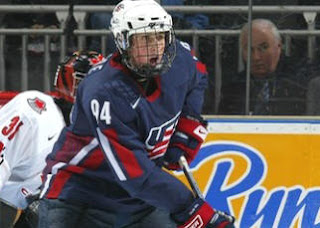 Millard: Drew Shore-The American gives the Blueshirts size up front. The Denver product has committed to his hometown Pioneers, but Chilliwack owns his WHL rights. The Rangers have drafted only 4 college bound kids since Al Montoya in 2004 and might persuade Shore to head north for the WHL.

Flaming: Drew Shore – At this point in the 1st round the best player available will be very subjective and with more of a need for forward depth I expect New York to look up front. Drew Shore would add both size and skill to the organization. Rangers GM Glen Sather is part owner of the Chilliwack Bruins, the WHL club that holds Shore’s CHL rights, which would add further intrigue.
Posted by Guy Flaming @ 6:00 AM