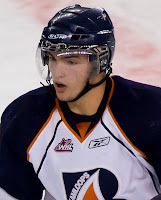 Every year Dean and I are fortunate enough to recruit a few NHL draft eligible players to do some guest blogging with us. The list of past players who have taken part include Jordan Eberle (EDM), John Moore (CLB), Ethan Werek (NYR), Mike Lee (PHX), Joe Colborne (BOS), Dylan Olsen (CHI), Mark Pysyk (BUF) and Brett Connolly (TBY).

We've already begun the 2010-11 series earlier this season with the first installment from USHL standout Seth Ambroz. That was recently followed up by Edmonton Oil Kings forward Travis Ewanyk.

Now we are pleased to welcome on board our third 2011 eligible prospect, an 18-year-old product of Prince George that plays for the rival Kamloops Blazers. Here is the first chapter of the 2011 Guest Player Blog by forward Dylan Willick... 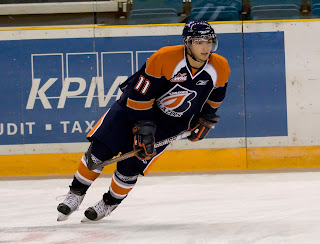 Currently, I alternate between playing centre and right wing although I played centre during my entire minor hockey career. I am currently 5'10" and 190 lbs. I was born in Hinton, Alberta but played the majority of my minor hockey career in Prince George B.C. I have been playing hockey since the age of three because my parents saw how much I loved the sport. I still play because of how much I love it…

Playing minor hockey in Prince George wasn’t often a team success story. While we always made it to Provincials, my team never once played in a medal game. In Minor Hockey, I did have the opportunity to play alongside great players such as Brett Connolly and Ryan Howse. I also played on the Under 16 & Under 17 teams and played alongside other upcoming WHL players such as Jordan Weal. In the Major Midget League, I faced off against players like Ryan Nugent-Hopkins and Kevin Sundher.

I was honoured to represent my province twice on Aboriginal Team BC and played at two National Aboriginal Hockey Championships, one season serving as the team Captain.

On an individual and personal level, I can call players such as Brett Connolly and Ryan Howse my friends. While both are currently playing in the WHL, I believe it won’t be long before they are playing for their respective NHL teams. This past summer I skated and trained with both of these guys and others like Brandon Manning, and I like to think they taught me a thing or two. The North is producing some talented hockey players and it’s nice to see how well the guys are doing on their respective teams. 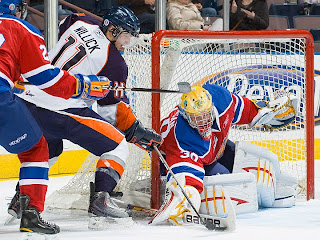 Enough about the past, let’s talk about the present. My team hasn’t had the start to the season we were hoping for. We currently sit at 7-7-0-1. The team has found great success on the road. We swept our Alberta road trip winning all three games against Red Deer, Edmonton and Calgary (Photo: Andy Devlin / Edmonton Oil Kings).

When we’re in our own building though, things seem to be going the wrong way. We have given up 22 goals against in the last three home games. We are not going to win many games with numbers like that. We’re working hard to flip those home numbers around and with the group of guys we have in the dressing room, it’s not a question of if we can do it, but when we will do it. Our coaching and training staff are top notch. The experience behind the bench teaching us the game is amazing. We are a lucky team…

We have a complete team in the dressing room this year. Skilled guys, tough guys and overall great guys everywhere you look... The start we’ve had does not reflect the true potential of this team so watch for us to be turning up the level of compete in the next couple of games.

That’s all I have to report for this first Blog spot. I look forward to keeping you all up to date on the Kamloops Blazers as well as myself. Thank you to the entire crew at The Pipeline Show for giving me this opportunity. Until next time…