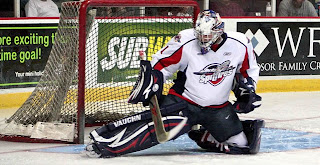 The winds of change are already blowing through the OHL this season as Memorial Cup host Mississauga has assembled a formidable team. This past week the Kingston Frontenacs added Ryan Spooner from Peterborough to their line up and it's safe to assume other teams will soon become buyers as others shift to the role of sellers.

The Windsor Spitfires have two of the biggest assets in the league with Zack Kassian (BUF) and Ryan Ellis (NSH) rumored to be available. But is it possible that they Spits would also consider parting ways with their rookie netminder, Dallas Stars first round pick Jack Campbell?

It's not nearly as crazy as it sounds, in fact... I'm now completely sold that it will happen.


Today on The Pipeline Show I spoke with Dom Papa, colour analyst from TV COGECO which carries the games of the Windsor Spitfires.

Our conversation began comparing the way that Windsor and Plymouth have responded after losing their star players to the NHL - Taylor Hall to Edmonton, Tyler Seguin to Boston. 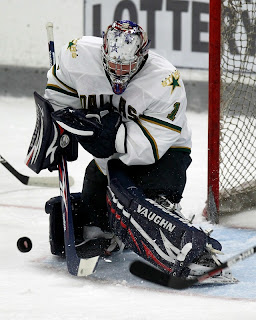 From there we talked about the current state of the Spitfires and that led us to the eventual topic of whether or not Kassian and Ellis would be moved. Papa said he believes they will be and that they might not be the only ones.

We talked about Jack Campbell's slow start to the year, which Papa described as "scary", and then the analyst suggested that the Dallas Stars 1st rounder might be moved before the January 10th deadline.

I was surprised. It was the first time I'd heard Campbell's name mentioned as a potential trade piece but as Papa explained, it makes a lot of sense. Like Jeremy Morin (CH) and John Moore (CLB), Jack Campbell was drafted outside of the CHL and like the other two, Campbell would be eligible to play in the AHL next year.

"I can't see Dallas putting him back in Windsor next season so I wouldn't be surprised if Warren [Rychel] considers moving Jack. Mind you, Jack has a no-trade clause in his contract."

Papa makes a great point - IF the Spitfires are going to become sellers this year and move Ellis and Kassian in order to load up for another run next season, wouldn't it make sense to also deal Campbell? Especially if there is a sense that Dallas would assign the netminder to the AHL's Texas Stars instead of the OHL?

The Kitchener Rangers got nothing in return for those two key players but at the time it wasn't an option that NHL teams showed a willingness to pursue with their prospects. Now though, do the Spitfires read the tea leaves and decide to get something while they can?

Definitely something to look for in the coming weeks.
Posted by Guy Flaming @ 2:00 PM

Well Campbell hasnt played well in the O and it might actually make sense for the Stars to keep him in the juniors the next season. I think the Spitfires should trade Campbell only because they think they have a better chance of winning with their back-up or else just keep Campbell. DUe to his play I highly dowbt that he will fetch a good return, so it might just be better to keep him in case Stars do send him back

According to the Analyst covering the team, Campbell started horribly but has been much better as of late. The OHL website still doesn't have game-by-game stats so it's hard to tell but I'm told he's been named a star in a few recent outings.

He works out to a .910 save percentage over his last 6 starts, and was named a three-star selection (3rd and 2nd) twice in that span.

Better, but certainly not the type of play he was expected to provide. I know I thought Windsor had a decent shot at getting into the Memorial Cup again, even though they lost Hall, Henrique, Fowler, et all, in large part because I thought they had a significant upgrade in goal.

horribly? wow, that is a little harsh. The first few games (without Ellis and Kassian)the team had a tough time even getting it out of their zone. There were a few games after the start where he tried to do to much and it effected his play but the last six games he has been playing to the level that made him a 1st rounder. Why don't you get on our HF board and go back to Sept/oct comments and read what the fans have posted on Campbell? I think you will find that they are for the most part very favorable towards the young man. And obviously Dallas is not too concerned as he is already signed.

The fact that Dallas has already signed him lends even more to the theory that they will put him in the AHL next year and that Windsor will trade him this year.