It's the first release of the year from NHL Central Scouting and as such, the 3 CHL leagues are ranked separately as is the NCAA, USHL and European countries. Most scouts have limited viewings for players outside of their immediate areas so we often see a lot of movement from this listing to the Mid-terms.

Tonight on TPS we'll speak with E.J. McGuire, who admittedly has not seen the WHL yet, about the Central Scouting rankings.

Until then, here are 5 things that jumped out to Dean and I this morning...

It's not a surprise to see Adam Larsson top the Swedish ranking but I was stunned that 6'2, 187 lb forward Victor Rask is found in the #4 position. This is a guy some have been trumpeting as a top-10 overall pick and yet he's fallen behind defenceman Jonas Brodin and forward Mika Zibanejad on the Sweden ranking. Rask is playing in the Allsvenskan for Leksand, the second best league in Sweden behind the SEL and maybe that's hurt his stock. However, Mikael Backlund also played in the league before bolting for the WHL after his draft year and he still went in the first round. 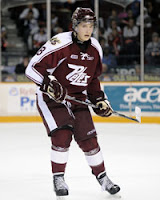 He was the CHL Rookie of the Year for 2009-10 and the Peterborough forward leads the Petes in scoring this season with 22 points. The Petes have struggled and just shipped Ryan Spooner to Kingston so they might be pulling the chute on the year already so things are only going to get tougher for Matt Puempel and company. That siad, it's a bit surprising to see a guy often considered worthy of top-15 overall consideration slotted in the #10 spot in the OHL. Definitely one we'll be talking to E.J. McGuire about tonight.

3. Bloom is off the Ambroz? 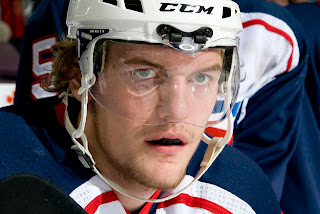 He's been earmarked as the top USHL player for 2011 for 2 years now but today we see Seth Ambroz has fallen to 3rd in the league behind US-NTDP forwards Tyler Biggs and Jonathan Miller. Ambroz hasn't lit the league on fire with just 3 points in 7 games this year and I have to assume that's the biggest reason for the slide. B.J. MacDonald insisted that he "came as advertised" to the WJAC in Penticton last week and his 5 points there helped USA win their third consecutive gold medal. He's 6'2 and 211 lbs so size isn't a concern. Perhaps this is just a case of two other guys out playing him early in the season. The fact that Youngstown blueliner Scott Mayfield comes in 4th from the USHL is also somewhat of a surprise. 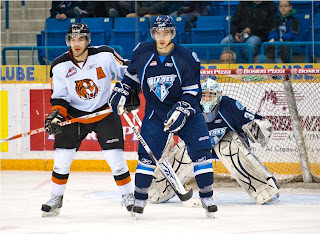 There's a lot of movement in the WHL rankings from what many people were projecting earlier on. David Musil is no longer the #2 guy having been hurdled by Portland's duo of Ty Rattie and Sven Bartschi - and I'm surprised that the Swiss player slotted in the #2 spot ahead of Rattie who leads the 'Hawks in scoring. Another Portland player, Joe Morrow, comes next and he bypasses both Myles Bell and Duncan Siemens in the process and no one I have spoken with about players in the league has even mentioned him to me yet. Bell I assumed would be high but I am very surprised to see Siemens fall to the #8 spot. (The Saskatoon rearguard will be on The Pipeline Show tonight). Not at all surprised to see Seattle forwards Colin Jacobs and Luke Lockhart fairly high but I had to do a double take that Kelowna's dynamic Shane McColgan sits 15th and Edmonton's Michael St. Croix is 17th - slow starts obviously hurt them both. Good to see Travis Ewanyk getting recognized, he comes in right behind St. Croix in the #19 spot. 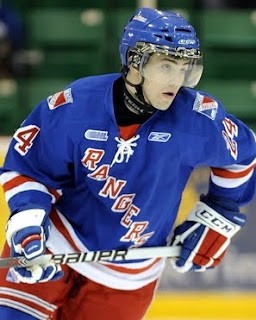 The biggest stunner for me is that with all the hype Ryan Murphy has received, including Don Cherry's guarantee on Coach's Corner that he'll go 1st overall in June, the Kitchener defenceman is ranked 8th in just the OHL. Murphy has a whopping 31 points in just 19 games and I know scouts were shocked in the summer that he didn't make the grade for Canada's entry to the Ivan Hlinka tournament. By all accounts he's very Ryan Ellis-like so maybe we shouldn't be expecting him to go so high. After all, Ellis went outside the top 10 and two years later, is still in the OHL. Clearly, scouts who are projecting NHL potential have a different view on the junior dynamo than fans watching him feast on junior competition do.
Posted by Guy Flaming @ 10:10 AM

I'll tell you right now, I work for a rival of central scouting, I won't mention who and we have Siemens not even close to as low as 8th overall in the WHL. In fact, we have him in the top 3!

Siemens is the big shocker to me as well.

I can't fathom why he would be as low as he is.

I can almost guarantee that he will be drafted alot higher than a player like Morrow.