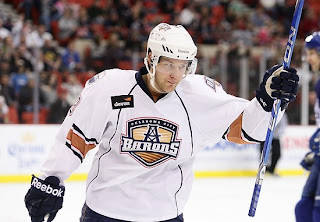 Fans in Springfield are probably wondering "Where the hell was this last year???"

The Oklahoma City Barons are riding atop the AHL's Western Conference with 20 points and have won 6 of their last 7 games, 9 of their last 12. The farm club of the Edmonton Oilers has rebounded nicely from a 0-3 start to the season that had some people wondering if 2010-11 was going to be a repeat of the last three years spent in Springfield.


The Barons won two of three games this weekend ending on a landmark shootout victory against the visiting Toronto Marlies. The Marlies led the game at one point by a 4-1 margin before Swede Linus Omark decided to take over the game. Omark went on to score 5 goals in the final 30 minutes of regulation time and the club would end up stealing the win in the shootout.

I spoke with forward Ryan O'Marra after the game and asked him when was the last time he played in a game where a guy scored 5 times. 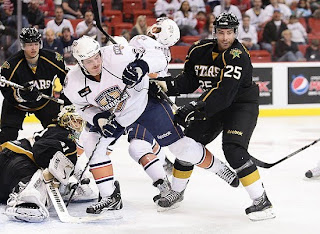 "Jeez... minor hockey?" he laughed, "I know I haven’t seen one live, that’s for sure. He actually had six goals if you include his shootout goal."

Which is true, Omark was the second of eight shooters to go for the Barons and he was the first to score. Rookie Milan Kytnar netted the eventual winner past former Red Deer Rebels netminder James Reimer.

Obviously it's been a strong start to the season for OK City but don't for a minute think the Barons are getting overconfident.

"I am cautiously optimistic about the future," O'Marra explained. "We’ve had good starts before and then had meltdowns so I think a lot of the core guys that were [in Springfield] are really cognisant of that. I think we’re all pretty hungry to keep this thing going and not let anything slip like in years past."

With 20 points in the bank, the Barons already have nearly a third of the 66 points that they ended last season with in Springfield. Success hasn't been the only difference for the team from last year. First and foremost the injury bug has not been an issue (knock on wood) and the relocation has played its role as well.

"It’s a new atmosphere – we’re in a new city and it just seems to be kind of a new era," said the 23-year-old. "It feels like a breath of fresh air and I think that’s been a huge factor just the whole idea that things are changing and things are different."

There is also a new coaching staff in place. Last year it was Rob Daum behind the bench and he was a coach that the players all respected and supported. Has Todd Nelson brought a different tactic that has led to success?

"Every coach I’ve had has had a different style. [Nelson] has been really good with the guys and everyone seems to connect with him and buying in." O'Marra said before making it clear that it wasn't coaching that hampered the team in Springfield. "I think it’s an attitude with our team that everyone is buying in early and it’s paying off."

That said, according to O'Marra, the Barons are not falling into the stereotypical mindset of having specific lines performing specific tasks and that might be a key to some of their early season success.

"We don’t really have set... you know, a checking line, 4th line energy line, 1st and 2nd scoring line," he began, "It just seems like we roll a lot for most of the game." 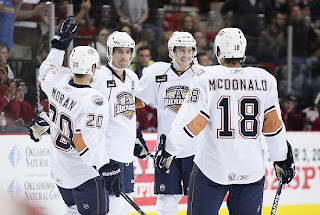 "Obviously [Brad] Moran and [Alex] Giroux and [Colin] MacDonald are having a good start and you can say that they are our first line based on the fact that Giroux has had 63 goals in this league before," O'Marra pointed out. "My line provides secondary offence and Vande Velde’s line is providing secondary offence and so is Kytnar’s so we really don’t have set [line] roles this year but my role has definitely changed."

The last couple of years in Springfield O'Marra was seemingly joined at the hip of Colin MacDonald on the shutdown line. Liam Reddox spent a lot of time with that duo towards the end of last year. In Oklahoma City it's a different scenario.

"Playing with offensive guys means you can usually do a little bit more and that you’re not always matched up against the other team’s top lines which gives you a little more freedom out there."

This season O'Marra has one familiar linemate in Reddox but also a new look winger in the exciting, dynamic scorer in Omark. Adding Omark to the mix instantly transforms the pair of Canadians into more offensive players and it also means that O'Marra's job is a bit different too.

"Yeah, absolutely. My role is based largely on the fact that he is out there trying to put the puck in the net." He said, "I have to be steady on [defence] and make sure the pucks are broken out every time, make sure that we’re constantly moving forward and no moving back into our zone. I have to play steady and just make sure that I do everything that I can to help facilitate his offence."

Omark's big night vaulted him into top spot on the team scoring chart and a tie for 5th overall in the league. He's now also tied with rookie Luke Adam (BUF) for the goal scoring mark with 10. 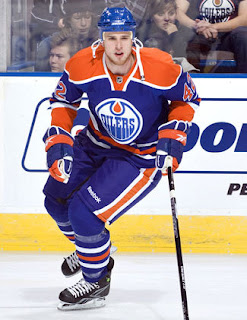 Unfortunately for O'Marra, he can't seem to buy a goal right now although he admits he's generally pleased with his start to the year.

"It’s really frustrating not to have scored yet because I’ve had some chances, hit a lot of posts and... I can’t believe how snake bit I am at the moment but yeah, I am pretty happy with the start personally." he said, "I’ve already eclipsed my assist total from last year and I’m playing a different role and being a part of a winning start will hopefully be positive for my career as well."

He's also riding a +7 rating which is nice compared to the -12 and -19 he was saddled with the last two seasons in Springfield. Showing that he can play in a more offensive role while still being defensively responsible will definitely help his chances of getting recalled to Edmonton at some point this season.

Oklahoma City is in the midst of an 8-game home stand and get back at it again on Tuesday night when San Antonio (PHX) comes to town. The Rampage have two games in hand over OKC and trail the Barons by just a single win so it's another big game.