Tuesday night we kicked off our extensive World Junior Hockey Championship, a day before December starts. Starting Tuesday and running right through and after one of the best tournament's in the world we'll get you primed and ready for the event taking place in Buffalo starting on Boxing Day. From players to coaches to analysts, you won't find a better source for information. Time to dive in... 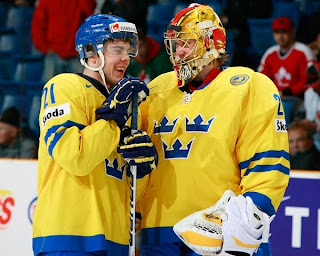 We started things off with a discussion about the Oilers deciding not to send Magnus Paajarvi to the tournament to play for Sweden. It would be his 3rd time suiting up in the event and we weighed the pros and cons of the decision.

Our first guest had a major hand in selecting the last line of defence invited to Canada's camp. Former NHLer Ron Tugnutt is the teams goalie coach and filled us in on each guy who was invited as well as some that weren't. We also got a scouting report on a Brandon Wheat King goalie who should someday wear the Maple Leaf on his chest. 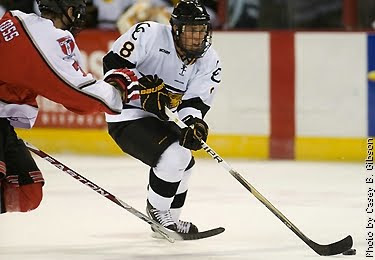 Jaden Schwartz is one of 4 collegians invited to the Toronto camp. He plays for Colorado College and his off to a fine start with the Tigers. Schwartz has played for Canada with the Under 18 program and Guy thinks could be a break out guy offensively. The former Notre Dame Hound can pretty much play in any situation including offensively as he led the USHL in scoring last season with 83 points. We also touched on the struggle his sister Mandi has gone through and how the hockey community has rallied around the family.

Mark McNeill won't play for Canada at this year's tournament, but might be a guy to watch for next year's event. The Prince Albert power forward and Edmonton product is eligible for the 2011 NHL draft and has put together a pair of 9 game point streaks this season. McNeill was cut by Canada at the U18 camp this year, which might have motivated him this season. The Raiders take on the Oil Kings at Rexall Place on Wednesday night so if you're in Edmonton, check him out. 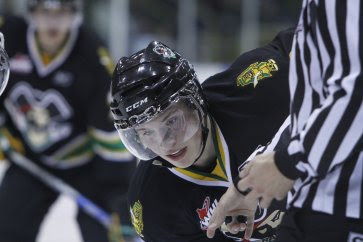 We wrapped up the show with our CHL insider Sam Cosentino of Rogers Sportsnet. We really went in depth with the invite list from surprise omissions to some unexpected guys who did get invited. Are the Bruins really considering loaning Tyler Seguin to the squad? Why Sam thinks Canada might be in tough to medal? And is Brett Connolly a bubble guy to make this team? All that and more in the final 2 segments with Sam.

If you missed it live...click the archive...and enjoy. A reminder we're back at it on Saturday morning from 9-11 AM MST on the TEAM 1260 in Edmonton or live around the world at www.thepipelineshow.com.
Posted by Dean Millard @ 10:39 PM

It's the most wonderful time of the year.

With the kids jingle belling and everyone telling you "Be a good Cheer!"

It's the most wonderful time of the year!

God, I love this tournament.