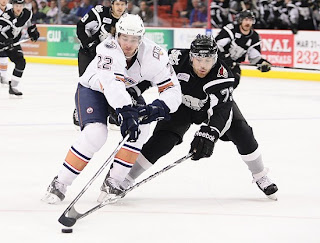 Ryan O'Marra sustained a shoulder injury during Oklahoma's 5-2 win over Milwaukee on Sunday. Late that night I mentioned that the incident occurred when O'Marra was initiating contact with an Admirals opponent but that the severity of the injury wouldn't be known until after x-rays on Monday. The results are in and so is the initial estimate of time loss expected for the Barons center.


I contacted O'Marra on Sunday and he expressed frustration because the injury will interrupt what was a pretty good start to the season for him. While he hasn't been scoring goals, "snake bit" he said, there is no question that he's been playing well and that his physical play and proficiency at the dot keep him as a prospect worth following.

After some tough times in Springfield (and Stockton) O'Marra was "finally feeling good about my game". The 6'2, 220 lb middelman has 12 points in 19 games, already setting a new career high for assists and he's rapidly closing in on his point best of 18 as well. 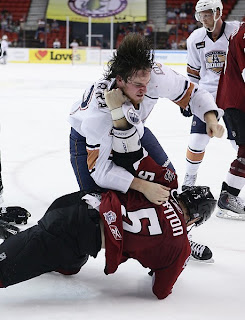 That pace will be stalled for the next few games as the report is that O'Marra has suffered "an AC (Acromioclavicular) sprain in his left shoulder" which will sideline him for "1-3 weeks".

Not great news but certainly not as bad as a shoulder separation or anything that would require surgery and lead to 6-8 weeks off, but still, an interruption in a season that was progressing quite nicely.

The 23-year-old has been playing with Liam Reddox and Linus Omark on one of Oklahoma City's top two lines. He's also been a key part of the Barons' top ranked penalty kill unit that has been operating at a 91.1% efficiency (1st in AHL).

O'Marra was originally drafted by the New York Islanders (15th overall, 2005) and was acquired by the Edmonton Oilers back in spring of 2007. (Photos: Steven Christy / Oklahoma City Barons)
Posted by Guy Flaming @ 3:33 PM