The United States has captured its third straight gold medal finish at the World Junior A Challenge on the strength of a third period comeback including 5 unanswered goals against Canada East. The final score on Sunday evening saw the Americans skate away with an impressive 6-4 victory.


Austin Czarnik scored twice including the third period equalizer and Jimmy Mullin's tournament high 6th goal of the event was also the championship clincher for the U.S. team.

Canada East led at one point 4-1 and had chased American netminder Zane Gothberg (BOS) but couldn't close out the game from that point on. 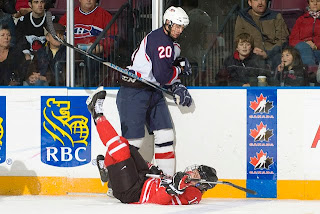 Forward Seth Ambroz (photo: Andy Devlin / Hockey Canada) ended the tournament with 5 points and, according to B.J. MacDonald of NHL Central Scouting, played as advertised all week as did defenceman Scott Mayfield. Ambroz is the top ranked player from the USHL and was the marquee name at the WJAC this year in Penticton.

This was the third consecutive title win for USA Hockey at the event starting with 2008 in Camrose, AB and followed up in 2009 in Summerside PEI.

earlier in the day, Switzerland captured the bronze medal hammering a disappointing Canada West entry by the score of 8-3.
Posted by Guy Flaming @ 9:44 PM