There will be plenty of story lines to follow as Canada breaks camp in Toronto a couple of weeks from now. Some of them are apparent today but others may develop in the days leading up or during the sessions themselves. Here are 5 that immediately come to mind for me including a couple that might not be answered until January 5th in Buffalo.


5. What Will be the Gormley Effect? 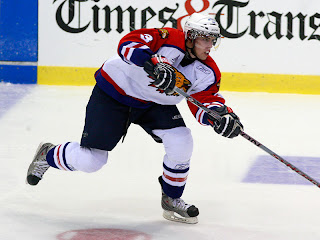 With 3 returning players available for the back end, there is no question that the defence will be considered Canada's strength. Ryan Ellis (NSH), Jared Cowen (OTT) and Calvin de Haan (NYI) are almost assured a spot on the final roster despite public statements to the contrary. Add Erik Gudbranson (FLA) and 4 spots are pretty much spoken for already. Is Simon Després (PGH), a very late cut from Pittsburgh, another near shoe-in? That would be 5 places gone.

Brandon Gormley (PHX) would have been considered a favorite to make the team but his knee injury is expected to keep him out of camp, the tournament and QMJHL for 4-6 weeks. So what effect will that have on the camp? Personally I think it opens the door a bit more for a guy who might otherwise be considered a long shot.

“He's got a laid-back personality. He's got the maturity of a 30 year old. Take away hockey -- he's just a rock-solid young man. He's got a number of great qualities. He's got really good size, he's 6-2, headed to 6-3, and starting to fill out. He's got outstanding hockey sense. He's got that poise, that innate ability to recognize when he has time and when he doesn't have time. … He plays a Nick Lidstrom style of game, he's smart and skilled and poised with the puck. The type of game he plays is similar to his. As you watch him and see how efficient he is you grow to like his game.”

If you're looking to find a replacement for Gormley you might argue that a player of similar traits and playing style would be ideal. When I look at the camp roster the player that most closely resembles that scouting report, in my opinion, is Mark Pysyk (BUF). Pysyk played alongside Jared Cowen during the Subway Super Series and at the 2009 Ivan Hlinka tournament he was often paired with... Brandon Gormley.

4. Is There Enough Scoring? 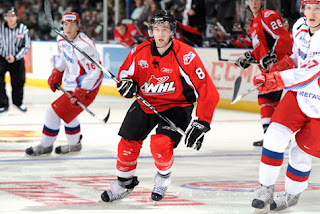 I might be in the minority here as I am hearing a lot of people raise this question but I don't see scoring as a major issue. It's true that a lot of high caliber Canadian talent like Taylor Hall (EDM) and Tyler Seguin (BOS) won't be made available but I'm actually not that worried about where the offence will come from. We won't know for certain until the tournament begins obviously, but look at some of the players that are going to be at camp.

You have the current leading scorer from the WHL in Linden Vey (LA), who I think could very well make a name for himself in Buffalo. He's got 18 goals and 47 points and while he is on a strong team in Medicine Hat, he's outscoring his own teammates by at least 17 points.

Last year's top scorer in the QMJHL and potential #1 overall pick Sean Couturier will be on the team. During the summer camp he and his linemates clicked and those two guys certainly don't lack in the offensive department either. Louis Leblanc (MTL) has 28 points in 20 games with the Montréal Juniors and Cody Eakin (WSH) nearly hit the 50-goal plateau last year in Swift Current.

Brett Connolly (TBY) is a dynamic talent that has been eying this tournament for years and will finally get his crack at it. Saskatoon forward Curtis Hamilton (EDM) and Red Deer's Ryan Nugent-Hopkins may be bubble players to many onlookers but both have 36 points on the season and provide Hockey Canada with completely different skill sets. I think this year's Jordan Eberle could be Jaden Schwartz (STL) , the top NCAA freshman who led the USHL in scoring last season with 33 goals and 83 points in 60 games.

I honestly don't think there will be a shortage of offence at all.

3. Who will Emerge as the Starting Goaltender? 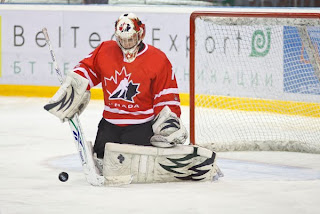 For the longest time it has looked like it was Olivier Roy's (EDM) job to lose and he further cemented that theory with a strong summer camp. I get the sense that he's leveled off a bit over the last couple of months and his .908 SV% and 2.88 GAA appear rather... average compared to the others in camp. I still think his age and experience make it likely that he'll be on the team but I'm not as sold that he's the odds on favorite to be the starter.

Personally I think Calvin Pickard (COL) will end up following in his brother's footsteps as Canada's go-to guy in net this year. His numbers are more impressive in every category (.930 sv%, 2.64 GAA), he's bigger and he played better against the Russians during the Subway Super Series. He's also playing better right now than Roy and with goaltending, you almost always ride the hot hand.

Not to sell Mark Visentin (PHX) short but I also wonder if Mississauaga's J.P. Anderson (SJ) might be Roy's toughest challenge for the back up spot. Not only are his stats (.920 sv%, 2.17 GAA) solid but his head coach also happens to be the bench boss for Canada. 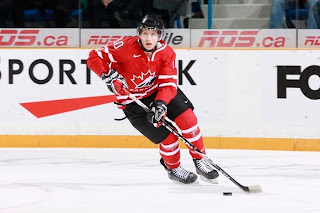 From the outside it certainly looks like all the stars and planets are lining up so that we'll see the Los Angeles Kings free up Brayden Schenn for the World Junior Championship. He's not playing for them, his AHL stint has expired and so it makes sense for the NHL team to loan him to Hockey Canada. It would also be good for Schenn as opposed to sitting in the press box in L.A. but no decision has been made it seems.

Adding Schenn to the team would obviously further address the perceived scoring concerns (99 points last year with Brandon) and also inject experience to the roster.

Canada's head scout, Kevin Prendergast, has been quoted as describing Schenn's possible availability as a "Christmas present" and it certainly would be a huge addition to the team.

1. Is There Room for Ellis + Barrie + Murphy or do you Make Room? 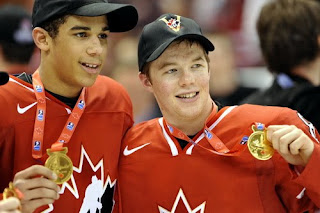 I would be absolutely stunned if Ryan Ellis (NSH) was somehow left off the final team considering his two years of experience. It seems silly to even consider that so let's not. He's there.

Most people think Tyson Barrie (COL) should be on the team as well but as I've asked on the show and have written here before, is there enough room on the team for two guys who are so similar and arguably limited to a specific role? Then you can't forget about Kitchener's Ryan Murphy who has nearly twice the points that Barrie does this year and has distanced himself from Ellis as well. But there is no chance all three make the team and being the youngest, Murphy is probably the odd man out.

We know that Ellis proved his lack of defensive skills was overblown in 2009 and it's probably true for Barrie as well. However, with Hockey Canada focused on being able to compete against big American and Russian opponents, size is going to matter. 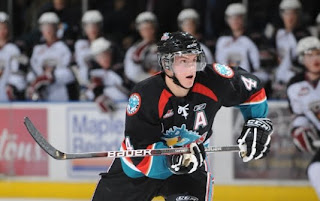 One option the team has is to do what they did in 2009 and carry 8 defencemen - it's outside the norm but icing two power play units with Ellis quarterbacking one and either Barrie or Murphy the other is definitely an intriguing prospect.

It's a major decision for Hockey Canada because carrying 8 blueliners doesn't just change the look on the back end but it greatly impacts the forward positions. Rather than having the usual 13 forwards, Canada would have just 12 so an injury up front during the tournament would have a massive effect on the team.

I believe that scoring will not be much of a problem. I think rather than having a superstar scorer, but almost everyone is capable of putting the puck in the net.

When we talk about scoring, I think it's worthwhile to mention Dave Cameron's "regular job" with St. Mike's in the OHL. The Majors are tops in the league but really rely on scoring by committee, with their leading scorer just barely breaking the top 20 in the Ontario Hockey League scoring race.
Looking at possible Team Canadas, I'm wondering if we might see a similar model. As we all seem to be saying, there isn't really a high profile scorer on that list.
Perhaps Cameron as coach is a pretty shrewd move.

Agreed on the scoring. With guys like Leblanc, Connolly, Couturier, Johansen, etc. it shouldn't be as big a problem as some think. Maybe it won't be the usual 6 goals a game but they should have the goaltending/defense to keep the scoring low and still win.

It may not matter, anyway, with the possibility of Schenn and these new rumours of Seguin being loaned to play... talk about a boost. Interesting what that means for the other centers in camp.