Iginla a King, Schenn a Flame? 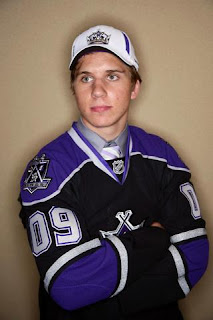 I was told tonight that the LA Kings are hard after Jarome Iginla, and that LA has assigned Brayden Schenn to Manchester on a conditioning stint as he is to be part of the package to land the Flames captain.

Schenn has played 8 games, he can play one more before a team must make a decision on his NHL future, as 10 games burns a year of his entry level deal. My understanding is that LA has assigned him to Manchester, thus allowing the Flames - if the deal goes through - the choice of keeping him or sending him back to Brandon of the WHL. Schenn has been a healthy scratch 7 times this year, and this allows him to play right now.

As for who else might be in the package I would have to imagine that one of the Kings young blueliners would be involved. Colten Teubert or Thomas Hickey come to mind, as Calgary gave up Keith Aulie in the Dion Phaneuf deal last year.

Here is where you can find the archived audio from the segment where it was discussed on The Pipeline Show on Tuesday.
Posted by Dean Millard @ 8:05 PM

Iggy and Smyth raising a cup together... lol