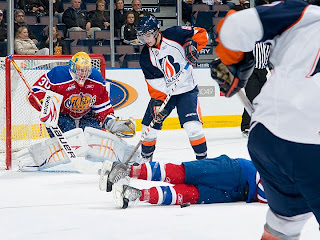 Just getting wind that the Edmonton Oil Kings have traded struggling netminder Cam Lanigan to the Kamloops Blazers in exchange for 19-year-old back up Jon Groenheyde. Here is the release from the WHL.


The table was set for Lanigan this year in Edmonton. Torrie Jung had played out his eligibility and the undrafted back up had an opportunity to prove that he should have been selected back in June. Lanigan was invited to both the summer prospect camp and the September prospect tournament by the Calgary Flames but did not get signed.

He's really had a hard time this year and I don't know if it's pressure in the starter's role that has affected him or not. Rebound control has been a major problem for Lanigan for much of the year. He's been pulled in a number of games and I know that the untimely blunders have cost the team points on some nights. 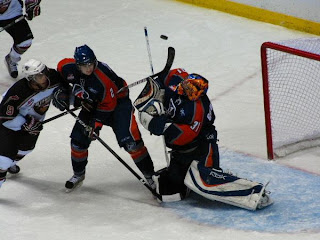 Jon Groenheyde has never been a starter in the league and is coming off his best WHL season - 31 games played, .896 SV% and a 3.79 GAA. A pretty ugly line from that press release above:

I'm not sure fans should be expecting him to be the new starter in Edmonton or just a platoon partner with Laurent Brossoit.

Brossoit hasn't played much but his stats are even worse than Groenheyde's this year but indications were that he'd get more starts for Edmonton considering Lanigan's poor play.

In conversation with Corey Graham recently, the Oil Kings' play-by-play voice, we talked about the possibility of the team making a netminding change. The last time Bob Green went out and got a goalie during the season it helped turn the year around for them - Torrie Jung came in and helped the team get to their one and only playoff appearance.

The Oil Kings are on an 8-game winless streak and kick off a tough 6-game road trip on Friday in Prince George.
Posted by Guy Flaming @ 10:30 AM