Led by head scout Kevin Prendergast, Hockey Canada released it's 39 player invite list today, while holding out hope that a name or two will be added to the list before camp begins December 12th in Toronto.


On Saturday Guy and went through a list of players we thought might be on the bubble for getting invites. One of the bubble guys both Guy and I didn't think would get invited was Ryan Martindale even though he's tied for 3rd in OHL scoring. The Oiler draft pick wasn't on the list today proving Hockey Canada looks at more then just numbers as Martindale has some holes in his game when it comes to physical play and consistency.

Scott Glennie was another big forward we didn't think was going to be there and he's not. The Wheat King forward was very inconsistent last year and while I have heard is playing better this year, he's not close to the player he was in 2009 when Dallas took him 8th overall.

Ty Rattie was a player Guy thought should garner a chance, but he didn't even though he's racked up 40 points with Portland this season. Rattie is in his draft year and will get a shot next year. 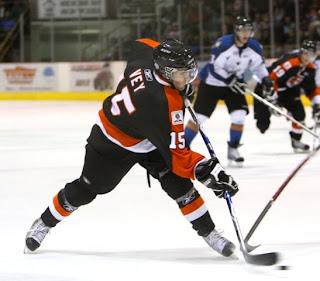 Others who we thought were on the fence but who did get good news were Carter Ashton, Ryley Sheahan, Dylan Olsen, and Linden Vey who currently leads the WHL in scoring with Medicine Hat. A couple of role players we wondered about also were left off the list in Byron Froese of Red Deer and Justin Shugg of Mississauga. You can hear our complete thoughts from Saturday here, and you can view Hockey Canada's full list here.

Our poll question on Saturday had to do with goaltenders. We wondered who the 4th tender after Olivier Roy, Calvin Pickard, Mark Visentin would be? Sam Brittain of the Denver Pioneers led the way when it came to votes, but the NCAA tender didn't get invited, instead it was J.P. Anderson of Mississauga, who took 2nd place in our poll with 29% of the vote.

A lot can happen during training camp but here is my list from talking to scouts about some of the players I haven't seen and from what I have seen in some players. The biggest question mark is Brandon Gormley, the Moncton Wildcat Dman has injured his knee and hockey Canada isn't sure if he'll be healthy enough to play in the tournament or attend camp. I'm going to assume Gormley is healthy for the purpose of this list.

you guys have claimed in the past that you had watched Olsen play in Camrose, but you say that he was on the bubble to get a w jr invite??? interesting

I think it's safe to say that both Dean and I would have him on our team and probably in a prominent role.

But we don't send out the invites. He got one... which we think he deserved, but I think we like him even more than Hockey Canada does.