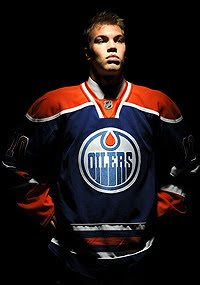 Mark Seidel penned some criticism directed at Taylor Hall today that has drawn a reaction from some corners of Oilerville. I'm not sure why this has caught so many people off guard since Seidel first voiced his opinion on this subject more than two months ago on TPS making this kind of... old news.


Mark Seidel was a regular on The Pipeline Show during our first season. Then, as head scout for International Scouting Services, Seidel gave us and our audience their first advanced scouting reports on players before the 2006 NHL Entry Draft.

Since leaving ISS we've had Seidel on the show a couple of times a year, the first of Season 6 came on September 11th, our first Saturday show of the new schedule. It was during that show that Seidel first made mention of Taylor Hall's "obsession" with getting #4.

"I think a little bit has come to light in the last week or so in regards to the difference of the two [Hall and Tyler Seguin]. Taylor Hall is a phenomenal talent but yet there is some off ice cockiness, there's some 'new generation' type of player. It's come to light with this No.4 issue and a lot of guys in the NHL were adamant that Kevin Lowe, 'do not give up that number', but he got a lot of pressure from every where and as a result he's given it up."

We asked him to clarify what he was talking about and he continued...

"I don't want to start telling people that he's a bad kid because he's not a bad kid... he has an air about him. There's no doubt about it, he's a confident kid. One of the things that he felt was very important was wearing No.4 and it was an issue early on as soon as Edmonton took him. A lot of guys on the inside talked about whether or not Kevin Lowe would give up No.4 and there was a lot of talk amongst Hockey Insiders and guys in the league told Kevin "Don't give it up, it's your number and this kid can wear whatever else and make his own mark". The feeling was all along that eventually [Lowe] would give in because everybody in the Oilers organization wants this kid to get off to a good start."

We summed that show up at the time and made special mention of Seidel's thoughts HERE.

You can tell by our reaction that neither Dean nor I had gotten that feeling at any point since the draft. It was news to us back then... not so much today.

Here is what Mark wrote today.

As for the accuracy of the opinion piece, Mark's entitled to his just as anyone else is. But like I said, it was a stunner when we first heard it back in September because it was completely opposite from what we'd been hearing. Remember Kevin Lowe's reaction at the draft when asked if he'd give up his number? It sure seemed like it was an idea completely out of left field to him at that time.

Robin Brownlee touched on the subject today too and got comments from Lowe. It sure doesn't appear to have legs... at least from this end.

It's a pretty strong accusation to make though and I know I'd have a lot of reservation about starting something like that unless I had it from multiple and credible sources. I'm assuming Mark feels he has those.

Seidel's story is making waves today because now it's in print, but it's not a new story. I wonder if it's a coincidence that the article was posted on CBC's website today... after all, check the date.
Posted by Guy Flaming @ 4:32 PM

Just had an anonymous email sent to me that brings up an interesting point/perspective:

"Just read the blog post about Mark Seidel and Hall. Keep in mind that Seidel was the first to mention any sort of issue with Kabanov and the Moncton Wildcats. We all know how that exploded.

I don't know Seidel and frankly, I don't agree with a lot of the stuff he throws out there, like his draft rankings.

I figured I would at least mention that he's been right about this prima donna stuff before, when everyone else was vehemently denying it. Maybe it's just blind squirrels and nuts, but it's enough to at least add a shred of credibility in my mind.

Taylor Hall laughs off the story from yesterday. Jokes that at his parents place they don't have pictures on the wall, just number 4's.

My problem with this blog post, Guy, is that the second Seidel made uncredited, unsourced accusations without so much as a quote, it stopped being an opinion piece.

The fact that it doesn't make much sense, based on the public timeline, leads me to believe this is at least in-part a witch hunt on Seidel's part.

Personally, I find that there's any amount of discussion over a NUMBER, let alone apparent "outrage in the hockey community" to be the most ridiculous thing I've ever heard, and I the watched Christine O'Donnell debate last month, so that's saying something.

He has now admitted this was a madeup story.
He also has come out with his 2011 draft rankings.........amazing since he has seen few of the players he is ranking!