~
It was an overloaded edition of The Pipeline Show last night because we chose to go guest heavy as we shifted our spotlight back north on the CHL playoffs. 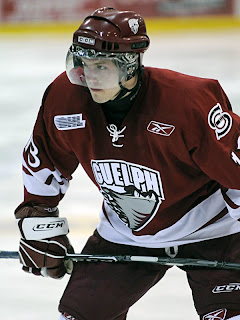 Our first guest of the evening was 2009 eligible prospect Peter Holland of the Guelph Storm. The big center is currently representing Canada at the World U18 Championship in Fargo-Moorehead. He's rated as a 1st round pick by both Central Scouting and ISS and last night he told us all about his year in Guelph, initially getting passed over by Hockey Canada and his enormous disappointment until he finally was a late addition for the U18s.

We also wrapped up our in-depth NCAA coverage by speaking with Dave Starman, analyst for CBS Sports. Dave's breakdown of the Frozen Four and especially the title win by Boston University was a terrific recap of last weekend's events. Will Miami recover from their stunning collapse? How differnet will BU look next year? Does Edmonton's Kieran Millan get drafted this June? 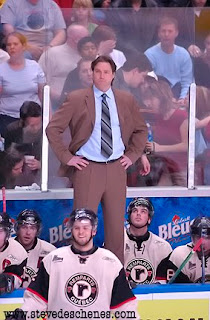 The CHL playoffs are well underway and all 3 leagues are down to their final four teams. Kevin Forbes of Hockey's Future took us through the QMJHL which features match ups between Drummondville and Rimouski as well as Quebec taking on Shawinigan. The Voltigeurs have completely destroyed their competition so far but now they come up against a legit test in the Memorial Cup host Oceanic. Patrick Roy's Remparts needed 7 games to get passed Cape Breton and have a short turn around before they begin again against the Cataractes. Forbes gives us his opinions and predictions on how things will play out. 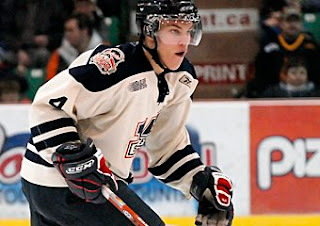 One of our OHL insiders is Aaron Bell who talked about the semi-final which features all four division leaders for the first time in league history. Belleville is a veteran team that has tons of playoff experience but they are taking on a very talented Brampton Battalion squad that includes Matt Duchene, Cody Hodgson, Evgeny Grachev and Thomas McCollum. The other series will be another beauty as John Tavares and the London Knights hook up with Taylor Hall's Windsor Spitfires. There is little to choose between all four clubs which makes predicting the outcome pretty tough but we all cast our fearless picks anyway. 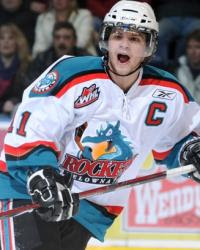 The Kelowna Rockets were still waiting to find out who they'd face while we spoke with their play-by-play voice, Regan Bartel. Bartel talked about the potential match up against Vancouver or Spokane and then went in depth in discussing how the Rockets had dispatched Tri-City and Kamloops. Jamie Benn, Colin Long, Cody Almond, Tyler Myers, Mikael Backlund and Ryley Grantham were all talked about. The Rockets and the Vancouver Giants begin their Western Conference final on Saturday April 18th.

Finally, we also played some Bad Ass Trivia and then got into the NHL Draft Lottery which was held while we were on the air. Dean and I started throwing names around for the top 10, part of which you can see in our first mock draft that Millard posted last night (see below).

If you missed any segments of the show last night, no worries because you can visit our site and listen to any of the archived interviews from the last four years. April 14th archived audio.
Posted by Guy Flaming @ 1:21 PM

Didn't I tell you guys that Matt Gilroy would win the Hobey?

Ok, ok, so I got Bemidji being in the National Championship game wrong, but I did pick the winners.

So which one of you is buying me a beer the next time that I'm in Edmonton? hahaha.

be glad to buy your few beers, but remember, they're pretty strong up here. Let us know when you're in town and you can come in the studio instead of doing the show over the phone.