~
A couple of Tuesdays ago I listed 5 players that I thought could really up their stock with a strong U18 performance. I just wanted to take a brief look to see if any of them did in fact raise their ranking now that ISS and Central Scouting have released another update. 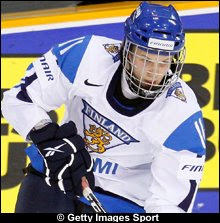 Toni Rajala went into the tournament ranked 39th overall by ISS and thanks to a tournament high 19 points in 6 games, is now slotted as a first rounder - 30th overall.

"The player who perhaps had the most eyes looking his way didn’t shy away but rather further pushed the spot light his way. Rajala needed to have a big tournament to cement his top round NHL draft pick potential. And do that he did, Rajala finished the tournament with 19 pts in 6 games, eclipsing the previous U18 scoring record set by some kid named Ovechkin, and he did it in one less game."

Edmonton Oil King import Robin Soudek is still unranked by ISS and NHL Central Scouting. He had just a pair of assists for the Czech Republic. I'm wondering if the winger's spot with the Oil Kings is secure for next season ir if the team has their eyes on a different player in the Import Draft to split the duties with Tomas Vincour in 2009-10.

I was being cheeky when I listed "Sweden" as a candidate and really, after their 5th place finish, I don't know that anyone on the club saw their stock go up. Maybe Anton Lander who had 9 points. I had singled out netminder Robin Lehner but if anything, he took a bit of a hit with a 3-2 record. ISS now has him ranked as the 6th best goalie available. Jacob Josefson scored rave reviews as a two-way forward though. It was William Wallen who seemed to impress ISS the most though:

"Wallen was consistently the most productive and effective Swedish player during the tournament. He is smaller but extremely elusive and quick, and very tenacious around the puck. Wallen played the point on the powerplay and packs a very strong shot. Although his size is a concern, Wallen plays a fearless game and squeaks away from checks with the puck but can also throw good physical hits as well, as illustrated on one shift against Canada where he took down McNabb and Doherty on the same shift. Wallen put up 8 points in just 4 games during the tournament. Wallen is very difficult to play against and his feet never stop moving."

USA's Kevin Lynch was ranked 82nd by ISS heading into the tournament but has come out sitting in the 42nd spot thanks to his 10-point performance. Central Scouting has actually dropped him from 93rd to 100th though so... who knows? 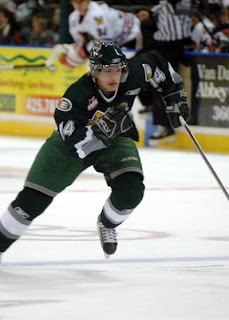 The guy I expected to see the biggest jump has vaulted up the charts. Everett Silvertips forward Byron Froese went from being unranked by both ISS and Central Scouting to #74 for ISS and #85 in N.A. for Central. ISS had this to say afterwards:

"Exposure at the world U-18s was great for him as he stepped up his game. Was consistently dangerous and cashed in chances around net. His defensive game is
solid and he often takes all the crucial faceoffs in all zones."

There are still two months before the draft and much can happen. The CHL playoffs are still ongoing and of course the NHL Combine and the interviews are ahead as well.

Really, the story of the U18s was the performance of the under-age players involved. The 2010 draft is already looking stellar with several players putting themselves on the map even more than they were prior to the Fargo-Moorhead games.

Canadians John McFarland, Joey Hishon, Brett Connelly and Erik Gunbrandson were all more than fillers on the roster - they were all impact players.

Finland has a pair of top prospects for next year in Mikael Grandlund and Teemu Pulkkinen. 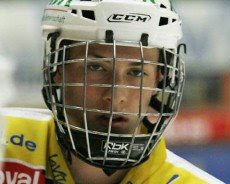 German forward Tom Kuehnhackl (pictured) was first brought to our attention last November by team personnel in Camrose as someone we should keep our eyes and ears out for and he was impressive at the u18s.

Of course the Russians will have a very strong 2010 class, that's no secret. Kirill Kabanov and Maxim Kitsyn have been on the radar for a while now and Vladamir Tarasenko followed up his impressive WJAC last November with another strong effort in Fargo. All 3 should be considered 1st rounders for 2010.

Great article. Out of curiosity, why would tne NHL CS final rankings come out BEFORE the World U18 tournament? ISS waited until after to evaluate all prospects playing against one another which seems like a logical thing to do.

Ya got me... it doesn't make sense to me either. Perhaps they will have another after the NHL combines because , that to would only seem logical.

I heard Sweden's WJC coach Pär Mårts on the radio (in Swedish) yesterday call the U18 team "excellent mature hockey". That said he was "disappointed by the level of play of Sweden's U18s" since he "needs at least 5-6 guys to step into the U20 role almost immediately in order to beat(compete for gold) vs. Canada".
Something is missing but he's not sure what.
Just a bit of FYI.