Top 5 Tuesday: From the AHL to the Show

As the NHL and AHL regular season wind down, we look ahead to next year for a second, and give you 5 AHL players who could be regulars in the NHL next year.

5. Ted Purcell-Manchester Monarchs-Undrafted
Ted Purcell's journey has been included a year at Notre Dame college in Wilcox Saskatchewan where the St. John's, Newfoundland product struggled and emerged to head south for the USHL. After 2 seasons with Cedar Rapids, his main goal was having a good season with the Black Bears of the University of Maine. Consider his plan a success, after 43 points in 40 games. The undrafted right winger left college after his freshman season and signed with the L.A. Kings in 2007. Since then he's played 46 games in the NHL collecting 18 points, including 15 in 36 games this year. His latest stint came after the 6.03 forward put up 38 points in 38 games with Manchester, which should be his last tour of duty in the AHL. 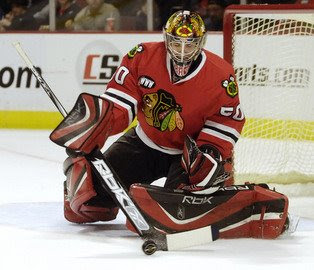 4. Corey Crawford-Rockford Ice Hogs-2nd Round Pick 2003-ChicagoCorey Crawford could get his PHD in patience. Since the Hawks selected him in the
2nd round of the 2003 draft, he's appeared in just 7 NHL games. Crawford was the 2nd goalie chosen in 2003, after Pittsburgh made Marc-Andre Fleury just the 2nd pipeman to be a first overall pick in a draft. Crawford spent 4 years with the Moncton Wildcats, setting team records for goals against, wins and tying the record for shut outs in 2003-2004 when the 'Cats lost in the league final. Since then Crawford has played more than 200 games in the AHL winning 110, including his 2nd season when he collected 38 victories in 60 games. It looked like Crawford would atleast get a shot at backing up Nikolai Khabibulin this year, until Hawks G.M. Dale Tallon signed Christobal Huet in the summer. But with the 'Bulin wall a unrestricted free agent, Crawford will get his chance next year, and don't be surprised if he challenges for the number one spot in the windy city. If not, I'm sure he'll have the patience to back up for a while. 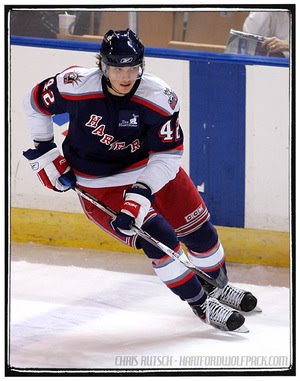 3. Artem Anisimov-Hartford Wolfpack-2nd round 2006-New York
The New York Rangers don't have anyone with atleast 60 points this year. Do you think they could use a guy closing in on 80 with their farm team? Anisimov finish tied with Springfield's Ryan Potulny for 3rd in the AHL with 35 goals, and his 78 points are good for a tie for 4th. He's more than doubled his goal production and almost has twice as many points as he did last year. Anisimov showed he wants to play by coming over from Russia, unlike some other drafted players in the NHL and the Rangers need to give the 6.03, 187 pound centre a chance next year to boost their anemic offence.

2. Chris Bourque-Hershey Bears-2nd round pick 2004-Washington
The Washington Capitals have 3 pretty good left wingers already in OV, Alex Semin and former Moose Jaw Warrior Tomas Fleischmann, but if Chris Bourque can switch to the right side he might have a home in Washington as their top right winger Viktor Kozlov has just 39 points in 64 games. In Hershey this year, Bourque is proving he can dish it out with 51 assists, the 4th best total in the AHL. The son of Ray also has 21 goals in just 66 games. He's not very big at just 5.08 and 180 pounds, but has increased his point totals in each of his four minor league seasons. 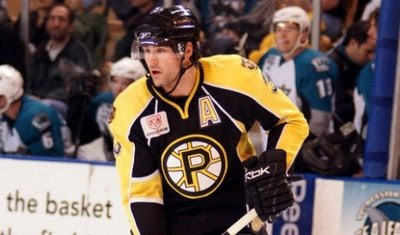 1. Johnny Boychuk-Providence Bruins-2nd round pick 2002-Colorado
The Edmonton product didn't fit into the longterm plans of the Colorado Avalanche after last season, but it looks like he could be a big hit in the immediate future of the Boston Bruins. Boychuk was a big hitter with the Calgary Hitmen the last time they had as good a team as they have now, but showed some offence with 13 goals in his final junior season after getting traded to Moose Jaw. In 4 years with the Avs organization he notched just 27 goals, but with Providence this year, Boychuk scored 20 times and added 44 assists in 76 games. It was good enough for the Defenceman lead in AHL scoring and earned Boychuk the top blueliner award in the top minor league in the world. Boston has two top offensive D-men in Denis Wideman and Zedeno Chara, but traded Matt Lashoff to get Mark Recchi at the deadline. Boychuk could fill the void next season.

Just a reminder that tonight is our annual Frozen Four coaches show, Guy and I will speak with all 4 of the coaches trying to lead their clubs to NCAA supremacy. Check out the line up and more, or if you miss it live, like Guy say's click the archive, at TPS, where the future of hockey...plays here now.
Posted by Dean Millard @ 4:00 AM